Just steps from our front door, I can see the jagged peaks of Mount Index in amazing detail, lit up by the last rays of sun.

The evening we arrived the mountaintop was hidden in fog.

It’s spring and we’re in the Cascade Mountains in Washington. To me, this is strange, wild, intimidating country. Rivers and creeks are raging because snow is melting in the mountains. We’ve passed by several streams of snowmelt tumbling down walls of rock alongside the highway.

Our vacation cabin is perched on the banks of the Skykomish River. It was raining our first night here, and the rain, together with the rushing river, created quite a din.

My husband built a fire in the wood burning stove, which took the chill out of the air and made everything cozier. After a while, though, we noticed a dull thunder swelling to a roar that soon overpowered the sounds of downpour and river flow outside our picture window. My first, nervous thought was “flash flood,” but when a high-pitched whine of metal on metal joined the mix we realized it was a train. 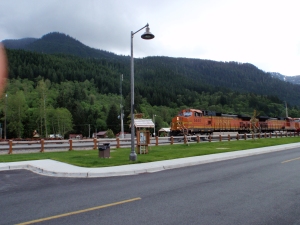 We are in train country. The legend of the Great Northern Railroad is very much alive here, though nowadays the trains that run are mostly on the Burlington Northern Santa Fe line. Twice now, while having lunch at the Cascadia Hotel Cafe in Skykomish, we’ve watched trains pass through, heading east from the port of Seattle with container cars from China, Germany, and Scandinavia.

Several times a day and into the night we hear the trains.

In a kind of parallel journey to my vacation, I’m reading Train Dreams, a novel by Denis Johnson about a logger and laborer who worked for the Pacific Northwest train companies of the early twentieth century.

The Pacific Northwest is a surreal and dangerous character in Train Dreams, as much a character as Johnson’s protagonist, Robert Grainier. 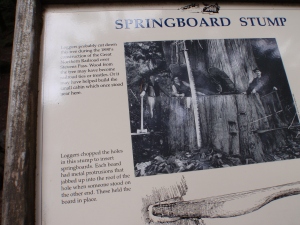 I thought about the life and times of Grainier when we hiked the Iron Goat Trail, along the now abandoned Great Northern Railway bed. On plaques along the way, old photographs depicted loggers like Grainier taking down giant cedar and fir trees.

Grainier grew “hungry to be around….massive undertakings, where swarms of men did away with portions of the forest and assembled structures as big as anything going, knitting massive wooden trestles in the air of impassable chasms, always bigger, longer, deeper.”

Yet Grainier also saw the great mountains and forests defeat the ambitious plans of mere humans. The land defeated him, too, in a very personal way, but he learned acceptance and, finally, a kind of reverence for the terrible beauty of the land he lived in.

The Iron Goat was the last spur of the Great Northern Railway, crossing the Cascades at the treacherous Stevens Pass. (I found Stevens Pass stunning the first time we drove through, going east at sunny noon, but on the late afternoon return trip, when it was foggy, overcast, and raining, I could hardly stand the vertigo.)  Disaster Viewpoint on the Iron Goat Trail marks the spot where, in 1910, an avalanche swept two snowbound passenger trains into the Tye River below, killing nearly 100 people. 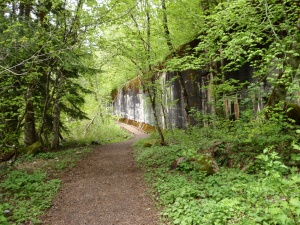 To alleviate the dangers of avalanches, the railroad companies eventually built snowsheds, huge retaining walls to protect trains from tumbling snow. My husband and I walked alongside an old snowshed on our hike.

We knew our hike would be cut short because a sign at the trail head indicated an avalanche had made the trail impassable a half mile in.

Sure enough, just a few feet from where the snowshed ended, we could go no further, thanks to a wall of hard-packed, dirt-encrusted snow. 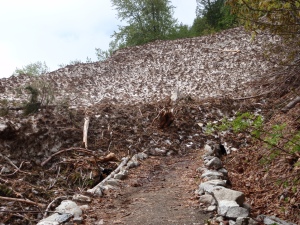 Listen to a trailer of Denis Johnson’s Train Dreams, the audiobook published by Macmillan: 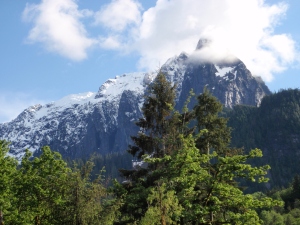