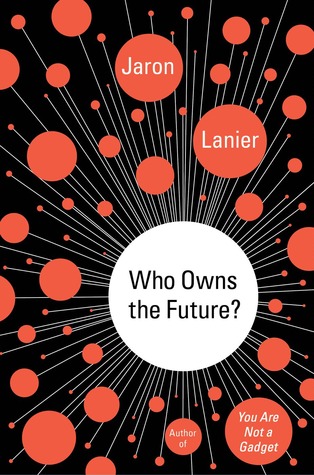 “If technologists are creating their own ultramodern religion, and it is one in which people are told to wait politely as their very souls are made obsolete, we might expect further and worsening tensions….People must not be gradually equated with machines if we are to engineer a world that is good for people. We must not allow technological change to be driven by a philosophy in which people aren’t held to be special.” Who Owns the Future? by Jaron Lanier

I’m glad I found my way to this book and Jaron Lanier. Although Who Owns the Future? was at times frustrating, perplexing (and even annoying), Lanier’s message is an important one. If you care about where the human race is heading in light of the highly disruptive information revolution that is only speeding up, I encourage you to become familiar with Lanier’s views and think about the issues he raises.

A computer scientist who pioneered virtual reality and a co-founder of start-ups now part of Oracle, Adobe, and Google, Lanier currently works at Microsoft Research on top-secret projects. In Who Owns the Future? he hints at a project involving the manipulation of fault lines in the earth to prevent quakes. Big stuff like that. Lanier is a musician and composer too, and his music has been performed all over the world.

Lanier proposes that we work toward “a humanistic information economy that rewards ordinary people for what they do and share on the web.” (Italics are mine.) If you follow my blog, you know I’ve been reading Wendell Berry, who writes about the displacement of farmers, small business owners and families in rural America by industrial-scale farming. Massive displacement of much broader swaths of society by technology is coming if we don’t make adjustments, and this is what Lanier is concerned about. I see Berry, who is in his 80s, and Lanier, a Gen X’er, as kindred spirits sounding the alarm about our cold, competitive, mechanistic society and its degradation of the human spirit.

Lanier does not think “Luddite” is a derogatory term. He believes the Luddites were onto something.

Technology has made it increasingly difficult to earn a living in music, photography, publishing, and journalism. Lanier warns that this could eventually be the case in manufacturing, medicine (robots performing surgery and caring for the elderly are two examples) and other mainstream fields. He predicts the middle class will continue to hollow out, with money and power concentrating among “Siren Servers” such as Facebook and Google, financial and insurance companies, national security agencies, and other powerful corporations that gather vast amounts of data for free and profit enormously by it. If the middle class implodes, so will the Siren Servers and everything else.

“A Siren Server…is an elite computer, or coordinated collection of computers, on a network. It is characterized by narcissism, hyperamplified risk aversion, and extreme information asymmetry. It is the winner of an all-or-nothing contest, and it inflicts smaller all-or-nothing contests on those who interact with it.

Siren Servers gather data from the network, often without having to pay for it. The data is analyzed using the most powerful available computers, run by the very best available technical people. The results of the analysis are kept secret, but are used to manipulate the rest of the world to advantage.

The plan will always eventually backfire, because the rest of the world cannot indefinitely absorb the increased risk, cost, and waste dispersed by a Siren Server.”

Lanier gives an example that is close to home. As Kodak, headquartered in my city, downsized nearly its entire workforce of 140,000 employees, Instagram arose, a social media giant where amateur and professional photographers post their photos for free. I love Instagram; I post photos there often. At the time of its founding, Instagram employed thirteen people.

A few other personal examples: 1. I have a loved one in photography. He and his colleagues are finding it increasingly difficult to earn a living. 2. My brother was laid off from his city’s newspaper as it hemorrhaged journalists and printing staff. 3. The house and shop where I grew up became worthless nearly overnight because of the mortgage crisis in 2008; Lanier says the housing crisis came about, in part, because of high-speed, networked financial transactions.

To make a long, complicated book short, Lanier believes people should be paid micro-royalties for the information they give away for free on the internet. It wouldn’t be difficult to make this possible from a technology standpoint, and Lanier delves into the accounting aspects, too, which I skimmed over. These micro-payments could be a viable way for people to earn a living, as they are reimbursed for the value they now provide for free. I can’t help but think of Henrietta Lacks, who was never given a cent for her “immortal” cells; they have been replicated around the world and have contributed enormously to medical research.

Lanier admits that, like many other Silicon Valley techies, he bought into the utopian vision of how wonderful it would be when information flowed freely to everyone on the Internet. Years ago, I drank the Kool-Aid, too, though grudgingly, because I’d made a living at writing. I have not been overjoyed to see writers go unpaid. Lanier contends that the rewards we get–such as free services like Facebook and WordPress for blogs such as this one–are not, ultimately, enough remuneration for what we’re contributing. Universal health insurance and other social fixes, if they ever come about, will not be enough.

Many disagree with Lanier, but my gut tells me he’s right. I find his message liberating. If, for example, I publish a quality memoir, I don’t want to give it away for 99 cents, or for free. I really don’t.

If I choose to have my DNA analyzed, what will be done with this unique, precious, and sensitive data now owned by some company?

I don’t want to spend hours in front of a screen, either, as so many of us do now, while Amazon and Facebook grow rich from the data we give away. This is no way to live. For a variety of reasons, I find myself trying to cut back on screen time; I’d rather be hiking or gardening or otherwise living my life out in the world.

“When enough people lack economic dignity, there’s no way for the economy overall to function well. ….Some decades from now all those idealistic people who contributed to open software or Wikipedia will be in the same position as today’s aging jazz musicians….In a humanistic information economy, as people age, they will collect royalties on value they brought into the world when they were younger. This seems to me a highly moral use of information technology. It remembers the right data. The very idea that our world is construed in such a way that the lifetime contributions of hardworking, creative people can be forgotten, that they can be sent perpetually back to the starting gate, is a deep injustice.

Putting it that way makes the complaint sound leftist. But today there’s also an erasure of what should be legitimate capital. The right should be just as outraged. The proposal here is not redistributionist or socialist. Royalties based on creative contributions from a whole lifetime would always be flowing freshly. It would be wealth earned, not entitlement.”

In Who Owns the Future? Lanier sometimes used terms and references new to me. Techies and younger folks will probably have an easier time, and there is a glossary that’s helpful. Lanier’s style and syntax are different, too, but I persisted, because I’m intrigued by how we might work toward a future that is ethical, human-centered, and filled with meaning. What I found dispiriting was his statements about baby boomers. If Lanier’s vision comes to fruition, he predicts it will not be until we have come and gone. That may be true, but the way he expresses this seems insensitive to his boomer readers. I hope to engage online for many years; Lanier implies this will be a largely unremunerated one-way street for my generation.

Lanier devotes a short section to the future of books, too. He offers a mixed outlook, but I’m encouraged by his conclusion. I won’t give it away here.

“My hope for the future is that it will be more radically wonderful, and unendingly so, than we can now imagine, but also that it will unfold in a lucid enough way that people can learn lessons and be willful. Our story should unfold unbroken by perceived singularities or other breaches of continuity. Whatever it is people will become as technology gets very good, they will still be people if these simple qualities hold.”

Do you agree with Jaron Lanier?

9 thoughts on “Who Owns the Future?”