“An older woman sitting by me on the subway, or waiting beside me in a line at the Department of Motor Vehicles, or having lunch at a nearby table, would cross the boundary separating strangers in order to volunteer that she, too, had once read Kristin Lavransdatter – a remark accompanied by that special glow which comes at the recollection of a distant but enduring pleasure.”  – Brad Leithauser, from the Introduction to Kristin Lavransdatter.

“He was well, but had cast himself into a wild life, just as many young people, out of despair, had done. They said that whoever was afraid would be sure to die, and so they blunted their fear with carousing and drinking, playing cards, dancing, and carrying on with women.” – Kristin Lavransdatter, by Sigrid Undset

Historical fiction is what I’ve been immersed in lately, what with watching the Outlander series and reading the remarkable 14th century Norwegian trilogy Kristin Lavransdatter.  I first read The Wreath, The Wife, and The Cross by Sigrid Undset when I was in my twenties, thanks to my college roommate, Kathy, (of Norwegian descent) who highly recommended it. I vowed to read it again someday from the perspective of a good portion of life lived. A few weeks ago I ordered it; the time was right, I thought, especially because the Black Plague has a part to play in Kristin’s story and we’re living through our own time’s pandemic.

The story centers around the life of Kristin from childhood to elderhood, and her sexual, emotional, familial and spiritual pilgrimage across the span of life. I see many similarities between Kristin and Claire Fraser, the protagonist of Outlander.

Published in 1920, 1921, and 1922, Kristin Lavransdatter was a worldwide literary sensation. Sigrid Undset won the Nobel Prize in Literature in 1928.

Here is something about Sigrid’s singular protagonist from the Introduction to the edition I’m reading: 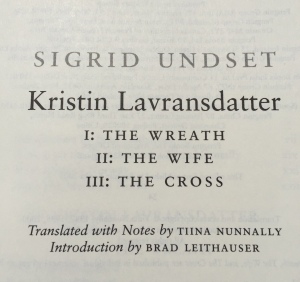 “In the annals of literary ‘fallen women,’ Kristin Lavransdatter, the twentieth-century/fourteenth-century literary figure, occupies a curious and fascinating place. After they fell, a number of Kristin’s nineteenth-century counterparts were whisked offstage, often to meet a premature end. In the latter part of the twentieth century, many of Kristin’s successors were sexual adventuresses whose exploits were pure and liberated triumphs. Writing in the first quarter of the twentieth century, Undset chose a middle path for her heroine. Kristin never doubts that she has covertly sinned, and the pain of her deceptions remains a lifelong affliction. Even so, her unshakable guilt in no way paralyzes her and she carries on with her life. Throughout the trilogy, Kristin is an indomitable presence in every role she undertakes….”

At age seven Kristin gazes at the view from her home:

“There were forest-clad mountain slopes below her in all directions; her valley was no more than a hollow between the enormous mountains, and the neighboring valleys were even smaller hollows; there were many of them, and yet there were fewer valleys than there were mountains. On all sides gray domes, golden-flamed with lichen, loomed above the carpet of forest; and far off in the distance, toward the horizon, stood blue peaks with white glints of snow, seeming to merge with the grayish-blue and dazzling white summer clouds. But to the northeast, close by – just beyond the pasture woods – stood a cluster of magnificent stone-blue mountains with streaks of new snow on their slopes…

She knew that wolves and bears reigned in the forest, and under every rock lived trolls and goblins and elves, and she was suddenly afraid, for no one knew how many there were, but there were certainly many more of them than of Christian people.”

Kristian Lavransdatter seemed to fall out of favor for a time, but it is having something of a resurgence. My son and his girlfriend are waiting eagerly in line to read it once I’m finished. (My son lives in the heart of the US Covid outbreak in Brooklyn, and we were glad when he was able to stay temporarily near to us. Yesterday was a fine, warm day, and he and his girlfriend came for a socially distanced visit. They brought a blanket and sat on the grass while I picked weeds. We talked about the books we’re reading.)

At over 1100 pages, the trilogy I have is the beautifully produced, deckle edged Penguin Classics Deluxe edition, with smooth, cream-colored paper, translated by Tiina Nunnally. Helpful footnotes – not too many – explain aspects of medieval Norwegian life.

This line in particular, which refers to the time of the Black Death, spoke to me as something that could be said about our current pandemic:

“Now it almost seemed as if all people were equally close and distant to each other at this time of great need.”

Kristin was skilled in herbal and healing remedies:

“They now had to do the milking and chores in the cowshed themselves; they cooked their own food, and they brought back juniper and fresh evergreen branches for the cleansing smoke. Everyone did whatever task needed doing. They nursed the sick as best they could and handed out healing remedies: their supplies of theriac and calamus root were gone, but they doled out ginger, pepper, saffron, and vinegar against the sickness, along with milk and food. When the bread ran out, they baked at night; when the spices were gone, people had to chew on juniper berries and pine needles against the sickness.” 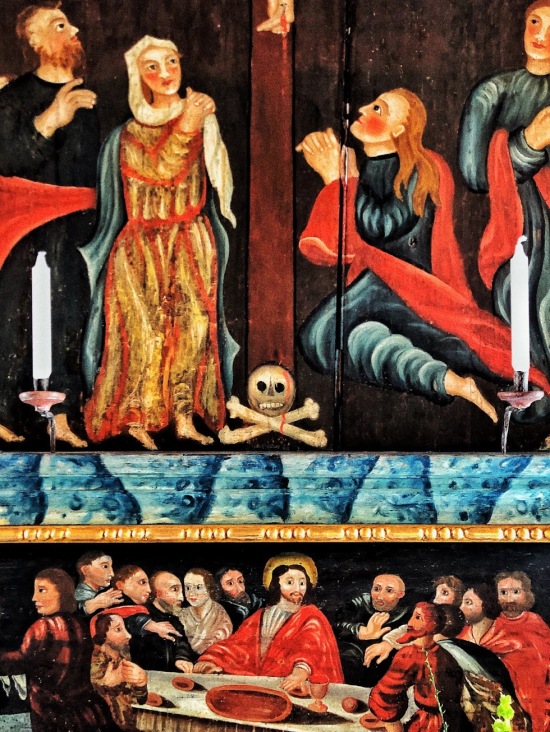 One of the murals in Älekulla Church, Sweden, where my great, great, great grandfather lived. Christian morality and the medieval church have central roles in the life of Kristin Lavransdatter. Reading it, I’ve been reminded of the rural churches I visited last spring in the Swedish towns where my grandparents lived.

In a distant century, my ancestor donated this Bible to his church in Älekulla. (In his handwritten dedication, he calls the Bible “his greatest treasure.”) I’d hoped to return to Sweden to do more family research this summer, but I won’t be getting on a plane anytime soon.

My dear friend Kathy of Blueberry Hills Art first introduced me to Kristin Lavransdatter. Please follow the link and check out her gorgeous website, which just made its debut. She’s on Instagram, too. Here is one of her woodcut prints, which reminds me of the nature that infuses Kristin’s world:

Kristin Lavransdatter is wonderful reading, especially if you’re spending hours at home. Have you read it? What are you reading these days? I have some special books to share with you in my next post; they are making my pandemic days richer.