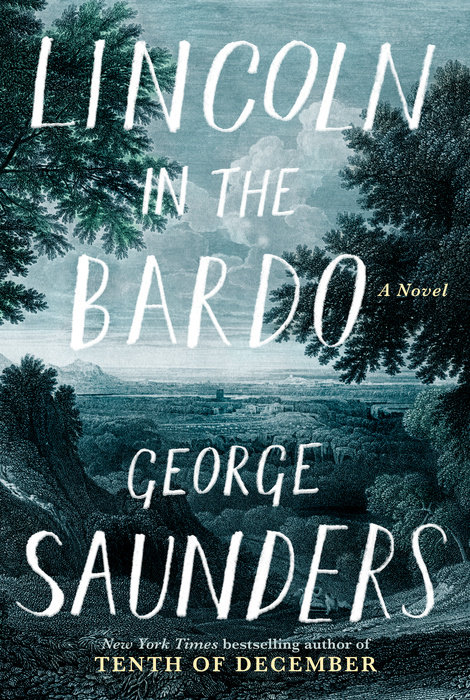 “I assisted in washing him and dressing him, and then laid him on the bed, when Mr. Lincoln came in. I never saw a man so bowed down with grief. He came to the bed, lifted the cover from the face of his child, gazed at it long and lovingly, and earnestly, muttering, ‘My poor boy, he was too good for this earth. God has called him home. I know that he is much better off in heaven, but then we loved him so. It is hard, hard to have him die!'”   – Lincoln in the Bardo by George Saunders

Lincoln in the title refers to Abraham Lincoln, and the bardo is, in Tibetan tradition, the suspended state between lives when the soul is separate from the body. Abraham Lincoln’s son, Willie, has entered the bardo upon death from typhoid, where he meets all manner of discontented souls who are similarly suspended, unable to let go of their former lives and move on to whatever comes next. In this bardo, whatever obsessed the person or remained unresolved at the time of death looms large (literally).

After Willie’s funeral, a stricken Abraham Lincoln came to the cemetery alone in the night to assuage his grief, according to historical sources. In this extraordinary novel, at the cemetery, Lincoln is unable to see the panoply of ghost-souls around him desperately trying to persuade the young Willie to move on because, in Saunders’ conception of the bardo, children who remain suffer a terrible fate.

It is the early stages of the Civil War, which weighs heavily on the President. Three years of staggering bloodshed loom and over half a million deaths, mostly sons of other grieving parents.

During this one chaotic evening, all of the restless souls, living and dead, are changed.

“The gentleman had much on his mind. He did not wish to live. Not really. It was, just now, too hard. There was so much to do, he was not doing it well and, if done poorly, all would go to ruin. Perhaps, in time (he told himself) it would get better, and might even be good again. He did not really believe it. It has hard. Hard for him.”

Lincoln in the Bardo is not an ordinary novel by any means, but Saunders is no ordinary writer. (See my post about his collection of short stories which I loved, Tenth of December.) Bardo reads like a play, and I believe plans are already in the making to produce a play. If so, I predict it will be every bit as popular as Hamilton.

George Saunders is a consummate writer of short stories, and he has often said in interviews that novels aren’t his thing – he’s tried without success to write three or four. And then, Lincoln in the Bardo, came along.

It took me a few pages to acclimate to this strange story, which is essentially a collection of formally cited historical sources, a few brilliantly conceived fictional sources, and lots of dialogue by a grand chorus of characters. It’s a quick read and vintage Saunders: funny, heartbreaking, with piercing, essential truths about life. When I reached the end, I went back to page one to begin again, so I could pick up on what I missed. I missed a lot, there is so much nuance in every scene.

You must read Lincoln in the Bardo. Besides, everyone is talking about it, and you want to be in on the conversation too, don’t you? If you love it, I recommend you follow it with Tenth of December.

“And there was nothing left for me to do, but go. Though the things of the world were strong with me still. Such as, for example: a gaggle of children trudging through a side-blown December flurry; a friendly match-share beneath some collision-tilted streetlight; a frozen clock, bird-visited within its high tower; cold water from a tin jug; toweling off one’s clinging shirt post–June rain. Pearls, rags, buttons, rug-tuft, beer-froth. Someone’s kind wishes for you; someone remembering to write; someone noticing that you are not at all at ease.”

Here, George Saunders talks with Stephen Colbert: (Fair warning, there is some talk of Trump here and the cultural divide.)

Have you read Lincoln in the Bardo or any of George Saunders’ extraordinary short stories? What did you think? Let us know in the comments.