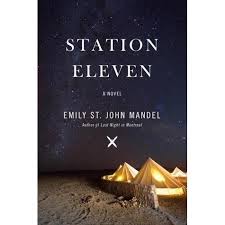 “On Day Seven the networks began to blink off the air, one by one. ‘So that all of our employees may be with their families,’ a CNN anchor said, ashen and glassy-eyed after forty-eight hours without sleep, ‘we are temporarily suspending broadcast operations.’ ‘Good night,’ NBC said an hour later, ‘and good luck.’ CBS switched without comment to reruns of America’s Got Talent. This was at five in the morning, and everyone who was awake watched for a few hours – it was nice to take a quick break from the end of the world – and then in the early afternoon the lights went out.”     Station Eleven, Emily St. John Mandel

I’ve been reading dystopian fiction lately and looking forward to the third installment of The Hunger Games: Mockingjay. When neighboring Buffalo was buried in over 70 inches of snow this week, I thought of Cal in the futuristic novel California, whose parents were lost in a massive snowstorm that destroyed Cleveland. And just as I dipped into pandemic-ridden Station Eleven, Ebola was front and center in the news. Reality and fiction are getting too close for comfort.

In California by Edan Lepucki, it’s post apocalypse: climate change, inequality, and societal decay on a massive scale have pushed civilization over the edge. The “haves” live in fiercely guarded gated communities, while others band together in communes and cultish groups, and some eke out a living in the wilderness on their own.

It’s Emily St. John Mandel’s Station Eleven I want to write about here, a National Book Award finalist. Of the two novels, I prefer this one, though both have gotten excellent reviews. In Station Eleven, a flu pandemic kills 99.9 percent of the population in a matter of days. We see the end of advanced civilization through the eyes of five characters, and the first decades after the collapse.

One of my favorite characters is Clark, a corporate consultant who specializes in coaching problematic executives and CEOs to change their behavior. Days before the outbreak of the Georgia flu, Clark interviews an especially perceptive employee to see what others think of a particular manager. I love this exchange:

“‘….it’s like the corporate world is full of ghosts. And actually, let me revise that, my parents are in academia so I’ve had front-row seats for that horror show, I know academia’s no different, so maybe a fairer way of putting this would be to say that adulthood’s full of ghosts.'”

“‘I’m talking about these people who have ended up in one life instead of another and they are just so disappointed. Do you know what I mean? They’ve done what’s expected of them. They want to do something different but it’s impossible now, there’s a mortgage, kids, whatever, they’re trapped. Dan’s like that….but I don’t think he even realizes it. You probably encounter people like him all the time. High-functioning sleepwalkers, essentially.'”

What was it in this statement that made Clark want to weep?

“…you go on like that, looking forward to five o’clock and then the weekend and then your two or three annual weeks of paid vacation time, day in day, and that’s what happens to your life.”

“Right,” Clark said. He was filled in that moment with an inexpressible longing.

Clark, of course, is jolted awake in a very big way when his flight to Toronto is diverted to a small Michigan airport after the pandemic explodes. He and his fellow passengers, untouched by the flu, watch the end of life as they know it on television. They never leave the airport – it becomes their settlement, their home. Eventually, Clark establishes a Museum of Civilization, where people donate iPads and smart phones and other remnants of their now-lost advanced culture.

“Like educated children everywhere, the children in the airport school memorized abstractions: the airplanes outside once flew through the air. You could us an airplane to travel to the other side of the world, but….when you were on an airplane you had to turn off your electronic devices before takeoff and landing, devices such as the tiny flat machines that played music and the larger machines that opened up like books and had screens that hadn’t always been dark, the insides brimming with circuitry, and these machines were the portals into a worldwide network. Satellites beamed information down to Earth. Goods traveled in ships and airplanes across the world. There was no place on earth that was too far away to get to.”

Meanwhile, a roving theater troupe travels from town to town performing classical music and Shakespeare for groups of survivors living in abandoned Walmarts and gas stations. In this troupe are characters we’ve met earlier in the novel.  The younger members only dimly remember a world with electricity and and other marvels, and some were born after the collapse. One day, they arrive at Clark’s airport settlement, and there is a poignant reunion of sorts for Clark.

Station Eleven, among other things, asks whether art can save and redeem humanity. I can’t help but think of this outpouring of dystopian literature as the proverbial canary in the mine. A wake-up call for those of us who, like the characters in Station Eleven, may need it. Ursula Le Guin, in her stirring National Book Award speech the other night, said we will need more writers who can imagine a different way of being. Six minutes well worth listening to.

Redeployment by Phil Klay,  a veteran of the Iraq War, won the National Book Award for fiction, so this collection of short stories is on my reading list.