“They say that war is death’s best friend, but I must offer you a different point of view on that one. To me, war is like the new boss who expects the impossible. He stands over your shoulder repeating one thing, incessantly: ‘Get it done, get it done.’ So you work harder. You get the job done. The boss, however, does not thank you. He asks for more.”       Death, in The Book Thief

Death is the narrator in The Book Thief, a young adult book about a German family during World War II that has a huge adult readership as well. It is one book not to be missed. The writing is outstanding. Published in 2005, The Book Thief won countless awards and honors, and has become a classic in YA fiction.

I recently reread the book before I saw the movie. I think the screen adaptation is a good one, although some viewers found it tame, and subtleties of the text can’t be captured on the screen. For example, Max, who is Jewish and hiding out in the home of Liesel and her foster parents, paints over every page of a copy of Mein Kampf and creates his own book, with illustrations. Max’s book is embedded within the pages of The Book Thief, and on the pages of Max’s book you can see faint traces of Hitler’s words.  One of the pages in Max’s book is a drawing of a girl and a boy holding hands and standing on a pile of bodies. Inscribed on the sun that shines down on them is a swastika, and the girl is saying, “Isn’t it a lovely day?”

The author, Markus Zusack, uses the written word as a thematic motif. While the Germans burn books thought to be subversive, Liesel and Hans write words on the wall of their basement as Liesel learns to read, and Liesel steals a book whenever she has the chance, in defiance of the Nazis. Liesel then begins to write her own book in order to make sense of the world’s chaos and carnage.

I do think the movie captured the essence of the story, and it is well cast, especially Sophie Nélisse as Liesel Meminger and Geoffrey Rush as Hans, her foster father. Death is the narrator in the movie, as he is in the book, and in both he is an unsettling storyteller who confesses he is haunted by humans. Of course, in addition to being the narrator, Death has a starring role in the plot as well.

My father was wounded in the war, just inside the German border. Occasionally, my mother spoke of her family’s Victory Garden, the rationing of meat and gasoline, and the “man shortage.”  I was born ten years after the war ended. As an adult, I eventually began to understand how the world turned upside down by war cast long shadows over my parents’ generation.

Have you seen the movie or read The Book Thief? What did you think?

HERE IS A SMALL FACT

You are going to die.

….the grave diggers were rubbing their hands together and whining about the snow and the current digging conditions. “So hard to get through all the ice,” and so forth. One of them couldn’t have been more than fourteen. An apprentice. When he walked away, after a dozen paces, a black book fell innocuously from his coat pocket without his knowledge.”   The Book Thief, by Markus Zusak 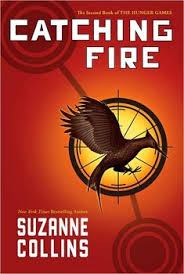 “If it were up to me, I would try to forget the Hunger Games entirely.”  Katniss Everdeen

I’ll be at the movies this month watching two visions of apocalypse. One really happened. The other – well, take a world of haves and have-nots to the extreme, and maybe that’s where we’re headed.

I love watching my favorite books on the screen, as long as it’s done well. If you’ve read these young adult books that obsess grown-ups, too, and/or see the movies, stop by Books Can Save a Life and tell us your thoughts. Why do you think these end-of-the-world stories are so popular? I’ll revisit this soon, once I’ve seen the movies.