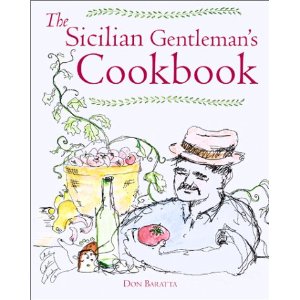 I often consult The Sicilian Gentleman’s Cookbook [by Don Baratta] when I want to do some Sicilian cooking. I think cooking becomes very personal, because we all have different tastes. I remember my dad describing different ways to make tomato sauce.  His mom, my grandmother, liked to make simple sauce. You cook down the tomatoes, add spices and, of course, garlic and onion, and you’re done….simple. But my grandfather had to have his sauce strained. Absolutely forbidden to have seeds and skin involved.
To me, The Sicilian Gentleman’s Cookbook is simple cooking. Just the way I imagine peasants cooked in Sicily, because they didn’t have much. They made do with what was available. I usually pull down the book for a quick idea and I go with what we have. Simple. I suggest the artichoke hearts with pasta, which is a family favorite when we get together with friends for Valentine’s Day. I also like the fish stew/soup recipe. It’s really a remarkable meal.

When we were visiting at Thanksgiving, I was browsing through the cookbook and found the Sicilian gentleman’s secret to losing weight: have a bowl of homemade soup every night for dinner. Sounds like a great idea for the long, cold winter nights to come. A hot bowl of homemade soup with a slice of fresh bread and a glass of Malbec or Beaujolais Nouveau, then a good book in front of the fire.
Elizabeth David’s literature of cookery 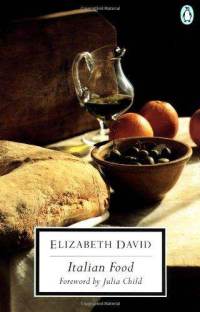 John’s story got me thinking about one of my favorite Italian cookbooks – Elizabeth David’s Italian Food.  The recipes are somewhat antiquated and difficult to re-create, because you can’t always find the proper, authentic ingredients, but they’re mouthwatering all the same. David, who was British, raises food writing to a high art. This is a book you could read and enjoy by a winter fire every evening, without ever making a recipe.
It was difficult to choose an excerpt, the writing is so good, but here are two of my favorites:

It is worth noting that in the dining-cars of trains, where the food is neither notably good nor to everyone’s taste, a dish of uova al burro may always be ordered instead of the set meal and will be brought rapidly and with perfect amiability by the dining-car waiter. So browbeating are the attendants in certain French and English railway dining cars over this question of ordering eggs or sandwiches instead of the dull, expensive, six-course meal provided that I have thought the matter worth mentioning.

She’s talking about a bygone era that sounds wonderful to me. Here is a link to the dining car menus on Amtrak’s long-distance trains – they even serve meals on Christmas Day.
Here is David’s description of a Venetian fish market:

The colours of the peaches, cherries, and apricots, packed in boxes lined with sugar-bag blue paper matching the blue canvas trousers worn by the men unloading the gondolas, are reflected in the rose-red mullet and the orange vongole and cannestrelle which have been prised out of their shells and heaped into baskets….In Venice even ordinary sole and ugly great skate are striped with delicate lilac lights, the sardines shine like newly-minted silver coins, pink Venetian scampi are fat and fresh, infinitely enticing in the early dawn.

I’d like to continue this family cookbook series, so send me the titles of your favorite family cookbooks and I’ll list them here. If you have a story or anecdote about a particular cookbook, please send it along.
Barbara Kingsolver’s Flight Behavior goes to….
Darlene Niman, who owns and operates Out With a Friend, a senior companion service in New York City. She says one of the best books she’s read recently is That Summer in Sicily by Marlena De Blasi.
Quotes from:
Italian Food, Elizabeth David, Penguin Books, New York: 1987.
The Sicilian Gentleman’s Cookbook, 3rd Revised Edition, Don Baratta, Firefly Books, Buffalo: 2002.