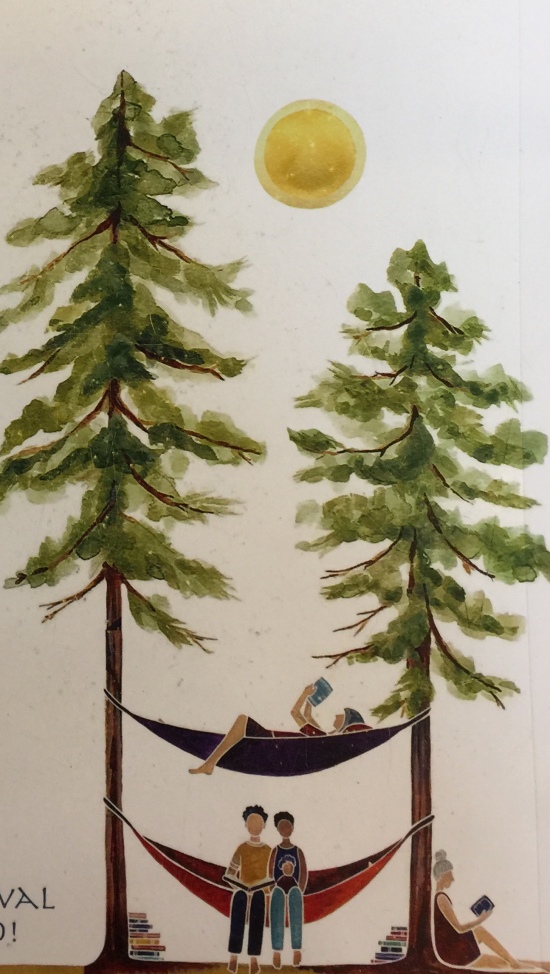 The poster for the inaugural Sisters Festival of Books reminds me of our backyard view of the full moon peeking through ponderosa pine. (We even have a hammock.) Until we moved to central Oregon, I never knew how big the sky could be, nor how magnificently a rising moon could command the landscape. Or how good it feels to sit on a big lava rock reading while the high desert sun warms you deep in your bones.

A village lost in bookish revelry….

That’s what I did this weekend in this quirky little town we moved to the year before last. I indulged in bookish revelry with other like-minded book-lovers, in the first ever book festival to be held in Sisters, Oregon, thanks to hard-working volunteers, generous sponsors, and Paulina Springs Books.

Outside, the weather was bone-chilling and windy, with rain bordering on sleet. Inside, there were stacks of brand new books to choose from, a bake sale, writers reading aloud their latest work, and meandering lines where you could get your book autographed and have a long chat with the author.

Housed in the local middle school and at Paulina Springs Books, the festival was special because the venues were intimate and the writers so entirely approachable.

Here are three writers and a sampling of memoir, history, and poetry:

I Am a Stranger Here Myself, by Debra Gwartney 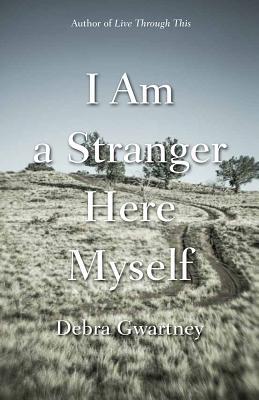 Gwartney held us spellbound reading a passage about the day 20-year-old Debra shopped for a wedding dress (for a marriage that sounded doomed), and the November, 1847 day the Cayuse tribes killed missionary Narcissa Prentiss Whitman, her husband, and eleven others.

You might wonder what the Whitman massacre and Debra’s wedding plans have in common. Gwartney reflected on how she had always been fascinated by Narcissa Whitman; somehow, this historical figure spoke to Debra’s own identity, and those of her mother and grandmother and other female relatives, who had long lived in the West. It took seven years of research and draft writing for Debra to discover the connective tissue between her own life and Narcissa’s, resulting in this fine book that combines memoir with an important part of American Western history.

I appreciated Debra’s honesty about her extended writing process and how patient she was in letting her story incubate. I Am A Stranger Here Myself is especially timely in light of how our culture is re-examining racism, indigenous culture, sexism, and the role of women in America.

Here is an excerpt:

“Something about Narcissa Whitman drew me in when I saw the book on my grandmother’s shelf this time. She was the first Caucasian woman (so say the history books) to cross the Rocky Mountains, the first white woman to give birth to a white baby on the frontier (same history books). A missionary killed by the people she aimed to convert – her death, some say, changing the course of the settling of the West….

….She was shaping up to be my ideal nemesis in the way she believed the land was hers to take, in her insistence that she alone held the one and only path to God. Putting an end to an entire culture was justified in Narcissa’s mind as long as it was done in the name of Progress and Providence. I would let myself despise her for that squirt of narrow-mindedness and her proclivity to judge, even while managing to ignore my own such propensities. So what if she was trapped in others’ expectations – her mother’s, and later her husband’s, and also her time’s and her church’s? I wouldn’t forgive her for building a good part of her cage.” – I Am a Stranger Here Myself, by Debra Gwartney 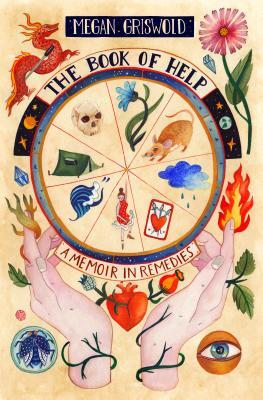 The Book of Help: A Memoir in Remedies, by Megan Griswold

“And now it’s after one a.m. and I get a phone call from Tim. He tells me he is in jail.

….I have just picked him up….We had started driving south on I-5 to get his car. After he’d directed me to keep driving past the route home, I’d asked, ‘I thought it all happened right before our turnoff. Why are we heading way down here?’

There was that vast silence. My stomach dropped.

“Let’s just wait to talk about it when we get home,” he’d said.    The Book of Help, by Megan Griswold

Megan’s life life was never the same after the unfolding of a personal debacle in her marriage. To cope, Megan, a true New Age child of the West Coast, experimented with and/or recalled her history with these and other remedies:

Megan’s voice in The Book of Help is comic, over-the-top, vulnerable, and honest. She doesn’t hold back, at all. I think you’ll either love her writing, or you’ll put the book down after the first chapter or two – she’s not for everyone.

I stuck it out and became quite taken by her story.

The following excerpt is near the memoir’s conclusion. Megan’s mother is losing her memory and approaching the end of her life; Megan is calmer, more mature, and has attained a measure of peace. I love this particular passage because it evokes a favorite Mary Oliver poem:

I board the plane. As it takes off, we lift out of Seattle’s gray cloud bank and hover far above the city’s clouds, now flooded in sunshine. I can’t really explain it, but amid the sunshine, I feel somehow turned toward life in a way I don’t remember ever feeling. None of what happened here is good news, but I feel touched by the fleeting nature of what I hold dear. I just want to eat up everything I can while I am still here. I want to eat big meals, run long distances, and have a really good laugh. I act on the urge to ring up people I haven’t spoken to in ages. Life is calling to me stronger than ever. Like wild geese.” 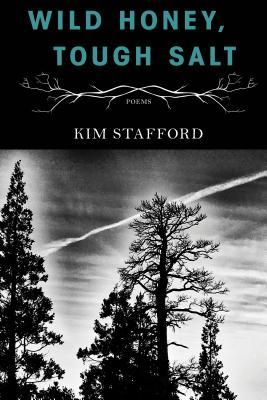 Oregon’s poet laureate, Kim Stafford, knows how to gather kindred spirits together to celebrate poetry and life, and he has a devoted following in Sisters.

Kim read to us from his new collection, Wild Honey, Tough Salt.  I found “Citizen of Dark Times,” especially resonant given all that has been in the news lately. (Garrison Keillor read this poem on The Writer’s Almanac recently – follow the link in my previous sentence and scroll to the second half of the recording.)

Given these dark times, we can “live as if in the early days of a better nation,” Stafford advised.

He suggested we write about daily happenings. Stafford’s writing practice makes him more optimistic, because “something is growing.” A writing practice is restorative, he says. “The spirit of what you want will come to you.”

Write a draft with promise. Then, your second genius will come as you revise.

A few days after the Sisters Festival of Books, this brand new poem appeared on Kim’s Facebook page:

Writer, rise from your writing desk,

and step forth from your solitary cell.

Reader, rise from your reading chair,

to throng in grand reunion.

a story fire we gather round.

It’s a voice as pure as a mountain spring,

a stanza landmark we reckon by.

How is this magic done? Page by page,

we season summer into fall, and

word by word we bud

and distill sorrow into song. So come,

friends, and be a village lost

I think the Sisters Festival of Books has made a fine beginning.

Here are some images from a central Oregon autumn: 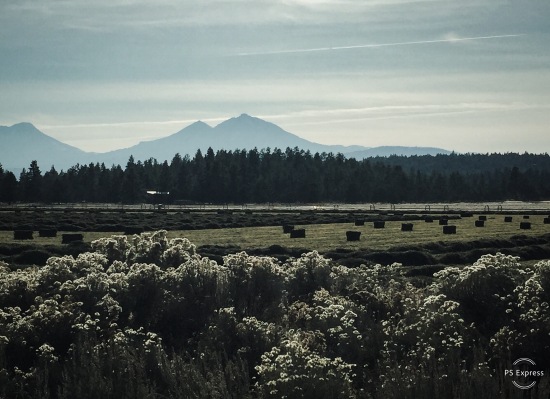 Classic Three Sisters silhouette, with newly mown hay. I drive past these mountains several times a week, and they always look different. Now that they are snow-covered, they appear closer and bigger. 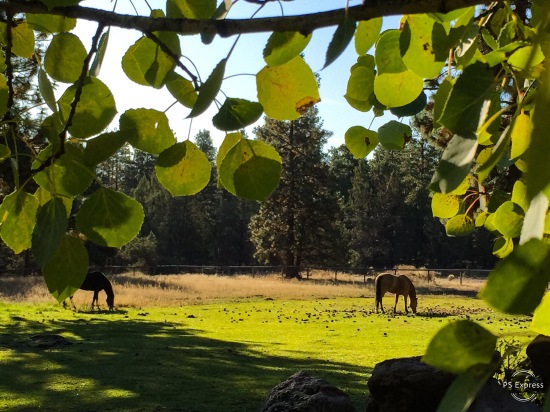 Sky and Riata, guests who came to stay with us for a while. The aspen leaves turned golden shortly after this photo was taken. 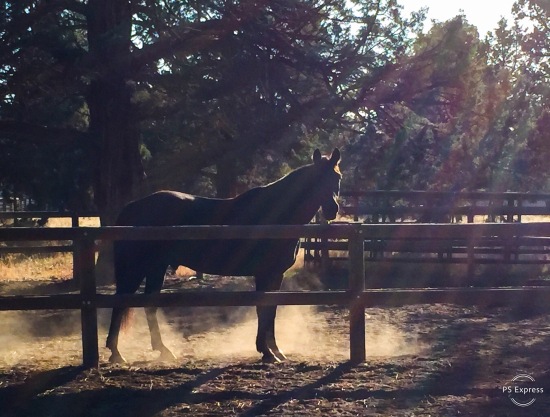 Sky in the morning 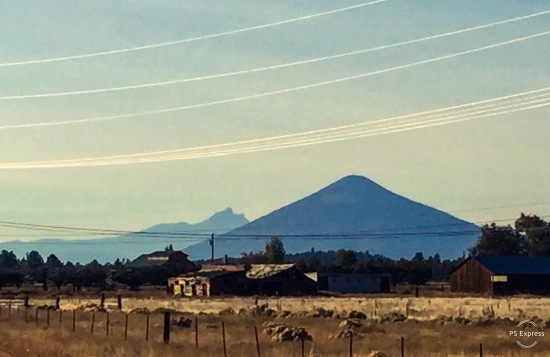 Black Butte, a volcanic cinder cone, is a primal, arresting shape in the Sisters landscape. Three-Fingered Jack, a Cascade mountain, hovers in the background. 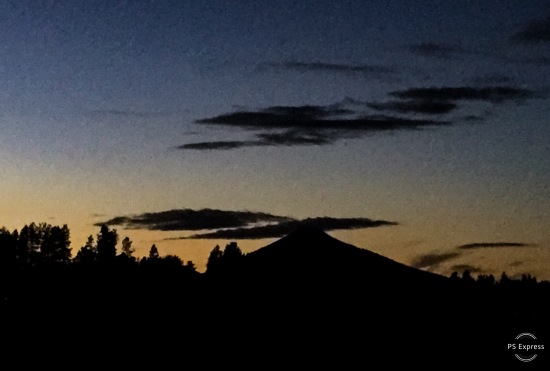 Black Butte from another angle, nightfall. 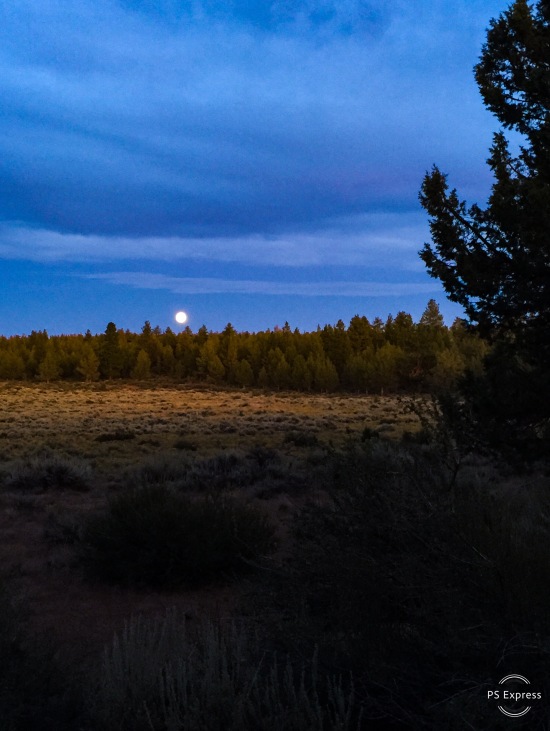