“There were Lupines, Sweet Peas, Phlox, Bluebells, Day and Tiger Lilies, Monkshood, Peonies, Columbine, Daffodils, single and double, a Bleeding-heart bush in the front yard, and vines at each corner, which at times nearly covered the house. And always there was Golden-glow by the kitchen door.”   An Old-Time Gardener

In The Language of Flowers, the main character, Victoria Jones, is a floral designer with a knack for choosing just the right foliage and blossoms for her customers, based on Victorian-inspired flower dictionaries that she’s studied. Having grown up in an Ohio floral shop, I was intrigued by the contemporary, upscale San Francisco flower scene depicted in Vanessa Diffenbaugh’s story.

In the 1950s, 60s, and 70s, our shop carried the standard blooms – roses, carnations, gladiolas and the like – which were shipped from California and South America – and laden with pesticides, though at the time we didn’t give that much thought. Nowadays, floral designers are artisans who use seasonal, locally grown, pesticide-free cultivated and wild flowers, in artful, natural-looking bouquets and arrangements. 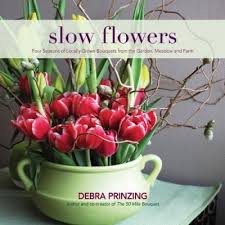 Writer and horticulture expert Debra Prinzing coined the term slow flowers, which has caught on in the floral industry. I’ve been enjoying two of her books, The 50 Mile Bouquet, and Slow Flowers: Four Seasons of Locally Grown Bouquets from the Garden, Meadow and Farm.  They were a timely discovery for me, as this summer we sold the building where my parents had their floral shop for nearly fifty years.

In both books, Debra highlights American flower farmers who are passionate about sustainable methods and land stewardship. Slow Flowers is a colorful, lush, small-sized, book with flower arrangements for every week of the year. As in a cookbook, Debra lists the “ingredients” (4 stems hydrangea, 9 stems pink snowberry, 5 stems Dahlia ‘Nijinsky,’ 15 stems amaranth), provides instructions, and suggests vintage and unusual vases and containers.

In The Language of Flowers, Victoria Jones falls in love with Grant, a flower farmer. She first meets him at a flower market, where he is selling varieties of lilies: tiger, stargazer, imperial, and pure white Casablancas. Here is what Victoria has to say about Grant:

“His face had the dusty, lined look of a manual laborer. I imagined he planted, tended, and harvested his flowers himself. His body was lean and muscular as a result, and he neither flinched nor smiled as I examined him…

He withdrew a single orange tiger lily from a bucket.