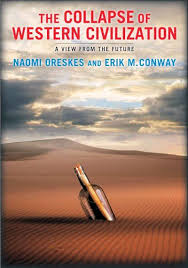 The Collapse of Western Civilization is a disturbing 50-page work of fiction that reads with the authority of nonfiction.

In the Second People’s Republic of China in the year 2393, a scholar writes an account the Great Collapse of 2093, brought about by failure to take action on climate change.

Pair it with CCR’s Bad Moon Rising; you can read it in an hour or two.

The book came about when co-author Naomi Oreskes, a geologist and historian who teaches at Harvard, reviewed the scholarly literature on climate change to see if indeed there was a lack of consensus among scientists, as is often claimed.

After looking at 1,000 peer-reviewed articles, she concluded that in fact scientists do agree that a high concentration of greenhouse gas is causing climate change.

When Oreskes published her findings in Science, she was championed by the likes of Al Gore. At the same time, to her astonishment, she began receiving hate mail. As she said in an interview, articles published in the scholarly literature are typically ignored by the public.

She and coauthor Eric Conway hoped a work of fiction that remained true to the facts of science might change opinions. Conway is a fan of science fiction and has been especially influenced by Frank Herbert’s Dune and Kim Stanley Robinson’s trilogies about Mars and climate change.

It’s unsettling to read about ideas and ways of life that we take for granted portrayed as extreme short-sightedness, self-delusion, and magical thinking.  The Collapse of Western Civilization will give you a jolt. It’s a quick, page-turning read to put you in a receptive frame of mind when the UN/Paris Climate Change Conference begins on November 30.

Here are some excerpts:

“There is no need to rehearse the details of the human tragedy that occurred; every schoolchild knows of the terrible suffering. Suffice it to say that total losses – social, cultural, economic, and demographic – were greater than any in recorded human history. Survivors’ accounts make clear that many thought the end of the human race was near.”

“At the time, most countries still used the archaic concept of a gross domestic product, a measure of consumption, rather than the Bhutanian concept of gross domestic happiness to evaluate well-being in a state.”

“…survivors in northern inland regions of Europe, Asia, and North America, as well as inland and high-altitude regions of South America, were able to regroup and rebuild. The human populations of Australia and Africa, of course, were wiped out.”

Commonly used terms that we don’t question are cast as old-fashioned and obsolete in the Lexicon of Archaic Terms at the end of the book:

“capitalism: ….One popular notion about capitalism of the period was that it operated through a process of creative destruction. Ultimately, capitalism was paralyzed in the face of the rapid climate destabilization it drove, destroying itself.”

“invisible hand: A form of magical thinking, popularized in the eighteenth century, that economic markets in a capitalist system were “balanced” by the actions of an unseen, immaterial power, which both ensured that markets functioned efficiently and that they would address human needs. Belief in the invisible hand….formed a kind of quasi-religious foundation for capitalism.”

“Period of the Penumbra: the shadow of anti-intellectualism that fell over the once-Enlightened techno-scientific nations of the Western world during the second half of the twentieth century, preventing them from acting on the scientific knowledge available at the time and condemning their successors to the inundation and desertification of the late twenty-first and twenty-second centuries.” 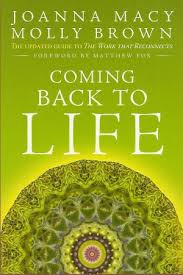 For an antidote to all the doom, read Joanna Macy‘s books, Coming Back to Life and Active Hope: How to Face the Mess We’re In Without Going Crazy. See also her short film, Joanna Macy and The Great Turning, about civilization’s shift from industrial growth to sustainability.

Have you read any good books about climate change? Are you planning to follow upcoming events related to the UN Conference on Climate Change? Are there local activities planned for your area?