Books purchased at the Wild Arts Festival in Portland, signed in person by the authors.

Litmosphere: 1. the vast domain of the world’s readers and writers 2. a lively literary mood permeating the air ~ sign in Powell’s Books, Portland

I love the literary scene in Portland. Our Thanksgiving visit there coincided with the annual Wild Arts Festival, a celebration of nature in art and books hosted by the Audubon Society of Portland in the old Montgomery Ward building, now known as Montgomery Park.

Walking into the festival, where hundreds of artists and authors were on hand, was like getting a gigantic embrace from the creative community.

I couldn’t decide among Ursula Le Guin’s many, many science fiction and fantasy books. In the end I chose her translation of Lao Tzu: Tao Te Ching: A Book About the Way and the Power of the Way, and she graciously signed a copy for me.

Next, we met Robert Michael Pyle, a jolly teddy bear of a man who spent no less than 15 minutes entertaining us with stories about how, in his Honda Civic with 345,000 miles on the odometer, he spent a year searching for as many of the 800 species of American butterflies as he could find. I could have spent hours listening to this man; instead I bought his memoir and travelogue, Mariposa Road, which he signed with, “May these far rambles on bright wings incite your own wild road trips!”

A dedicated ecologist and naturalist, Robert Michael Pyle has written nearly 20 books and is the co-editor of Nabokov’s Butterflies: Unpublished and Uncollected Writings. (The literary genius Vladimir Nabokov was a butterfly expert and had an extensive collection.)

I purchased another of Robert’s memoirs, Wintergreen: Rambles in a Ravaged Land, about Washington’s Willapa Hills, whose forests have been plundered by lumber companies. Robert lives on a farm in Grays River once owned by a Swedish immigrant. I’m descended from Swedes, who were attracted to the deep forests of the Pacific Northwest because it reminded them of home; I’d love to see Willapa country one day. Of course, Robert signed Wintergreen, too, with these words, together with a sketch of a snail: “May these moss murmurs and fern-words honor your own hills of home – and maybe urge you Northwesterly!”

Since I’m writing a memoir myself, I decided to go for the memoirs: In the Shadow of Memory, Floyd Skloot’s first memoir (part neuroscience and part autobiography about a virus that left Skloot disabled and bereft of memories) and 100 Tricks Every Boy Can Do: My Brother’s Disappearance by Kim Stafford (his brother committed suicide.)

Both of these generous writers spoke with me about their work and asked at great length about mine. Kim wanted to know the working title of my memoir and, when I told him, he gave me a writing assignment to try. As I did the exercise Kim recommended, I discovered that one particular word in the title is especially important to my memoir’s theme. It got me thinking about how I could bring out the theme more vividly as I revise.

The authors I spoke with at the Wild Arts Festival were incredibly kind and gracious. I had instant connections with these generous writers, who are among the best in America today. Don’t be shy at these kinds of events. Writers and artists are the most giving and engaged people you’ll ever meet.

Portland is a book-loving town, and as I walked around the neighborhoods with family, I noticed several Little Free Libraries. It’s also a poetry-loving town, and a couple of the homes I passed by had poems on display – including one by Kim Stafford’s father, the great poet William Stafford.

Slipped inside the Kim Stafford memoir I bought was the gift of a poem that begins, “The only heroic thing is to not be a hero.” I believe Kim borrowed this phrase from a poem by his father, William: “At the Un-National Monument Along the Canadian Border.”

Kim’s poem is called “A Few Words, Each Day,” and it includes this line: “The only heroic thing is to be a child of four…of fifteen…of forty…of eighty – trying with the heart and mind to listen to the self, each other, and the earth….” 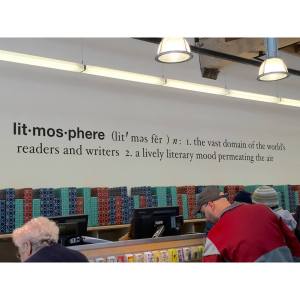 We stopped by Powell’s Books for good measure, where I learned a new word.

At Powell’s I bought Eula Biss’s collection of essays and the latest book by Robin Wall Kimmerer, who is a botanist and member of the Citizen Potawatoni Nation.

Kim Stafford: “That is my story.”