“It’s news if a woman feels terrible about herself in the world – anywhere, anytime, ever.”    Leslie Jamison, The Empathy Exams

At work when I need a break, I go for coffee in the atrium of the medical school. On the way, I pass by the learning labs, where occasionally I see people–young, middle-aged, and older, male and female–sitting in the hallway, waiting for their turn to go in.

They have a twinkle in their eye as though they know something you don’t. They’re psyched, as if prepared to give a performance. That’s because they’re medical actors, hired so medical students can practice their empathic patient interviewing and diagnostic skills. 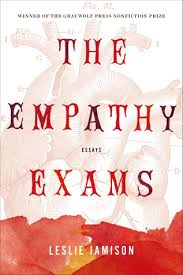 In The Empathy Exams, author Leslie Jamison explains what a medical actor does. She knows because she’s been one herself:

“My job title is medical actor, which means I play sick. I get paid by the hour. Medical students guess my maladies….

Medical acting works like this: You get a script and a paper gown. You get $13.50 an hour. Our scripts are ten to twelve pages long. They outline what’s wrong with us–not just what hurts but how to express it. They tell us how much to give away, and when. We are supposed to unfurl the answers according to specific protocol. The scripts dig deep into our fictive lives: the ages of our children and the diseases of our parents, the names of our husbands’ real estate and graphic design firms…

My specialty case is Stephanie Phillips, a twenty-three-year-old who suffers from something called conversion disorder. She is grieving the death of her brother, and her grief has sublimated into seizures. Her disorder is news to me. I didn’t know you could convulse from sadness. She’s not supposed to know either. She’s not supposed to think the seizures have anything to do with what she’s lost.”

These are the first paragraphs of the first essay in The Empathy Exams, and they intrigued me for a number of reasons: Leslie’s compelling voice; her take on the ironies and subtleties of medical acting; and because I, too, had been nonplussed when, as a medical librarian, I learned about conversion disorder.

A couple of years ago an “outbreak” of conversion disorder (known as mass psychogenic illness) among a dozen or more high school girls in a nearby upstate New York town captured the attention of media around the world.  One after another, the girls succumbed to uncontrollable tics and verbal outbursts. They were besieged with requests for interviews. Their physicians advised them to avoid social media so the frenzy wouldn’t cause their symptoms to get worse. Some people thought the girls were faking their illness. Erin Brockovich (with lawsuits in mind) suspected environmental poisoning. At the medical center where I work, I was asked to track the news coverage. Neurologists wanted to see if there was a correlation between spikes in media attention and exacerbation of the girls’ symptoms.

No environmental cause was ever found. Eventually, most of the girls recovered. One journalist wrote a well researched investigative piece that pointed out the girls came from troubled families in a town devastated by unemployment. Many of the girls had recently experienced significant domestic trauma. Perhaps this trauma triggered their conversion disorder.

In her essays, Leslie is concerned about physical and emotional pain, what it means to empathize with those who suffer, how difficult this can be, and why it is important to have our pain acknowledged by others, given the fact that we’re so often quick to accuse people of succumbing to victimhood. I often think about this when I read reviews dismissive of memoirs as self-indulgent. I wonder if I’m playing the victim when I write about some of my own experiences. Ours is not an empathic culture.

Leslie writes about her own pain and that of others in various walks of life: those suffering from “phantom” illnesses; a man in federal prison for a minor crime; ultra-marathoners who push their bodies beyond reason; three teen-age boys accused of murder on the thinnest of evidence.

As I read, I began to think of the girls with conversion disorder in a more nuanced way and, yes, with greater emapthy. The media stories had reduced the girls to caricatures. Leslie’s essays got me thinking the girls hadn’t had their fair share of empathy (or good fortune) in their personal lives and certainly not during the sensationalistic coverage of their illness.

I’d just about finished reading The Empathy Exams when I read a New York Times article about the alleged rape of a college freshman, Anna, by two football players. After what seems to have been a staggeringly incompetent college “investigation,” the football players were cleared. Anna left school after she was harassed for making accusations against members of the football team, but she plans to return this fall. She doesn’t want to be defeated, and she wants to help other women on campus.

I couldn’t get this story out of my mind.  I mulled it over when I went to work out at our community center. The story has unleashed a firestorm, with accusations back and forth: between Anna and the football players, as well as among college officials, the district attorney’s office, and Anna’s legal counsel. Many of the kids–the football players, the fraternity members, the girls who went to the party – were drunk to the point of oblivion. (Anna, herself, was so drunk she doesn’t remember being raped – hence, some of the controversy – though others witnessed it and did nothing. One of Anna’s friends did help her, and other friends decided to call the police.) How can this self-destructive partying be fun for anyone, and why are students driven to do it?

If you believe the unbelievable numbers cited in this story–that 20 percent of college women are sexually assaulted–it does seem as though we are not paying attention to something important. That perhaps we need to start listening to a certain segment of the population, and listening with empathy.

After I finished exercising, I sat in the lounge overlooking the pool, watching moms and dads swimming with their children. I pulled out Leslie’s essays and read the final one, “Grand Unified Theory of Female Pain.” Leslie seemed to be speaking about Anna.

“It’s news if a woman feels terrible about herself in the world–anywhere, anytime, ever….

Sure, some news is bigger news than other news….But I don’t believe in a finite economy of empathy; I happen to think paying attention yields as much as it taxes. You learn to start seeing.

I think dismissing female pain as overly familiar or somehow out of date…masks deeper accusations: that suffering women are playing victim, going weak, or choosing self-indulgence over bravery. I think dismissing wounds offers a convenient excuse: no need to struggle with the listening or telling anymore.”

Leslie has much more to say, and her essays are far richer than I’ve captured here. I won’t share her most important insights, as much would be lost in the translation.