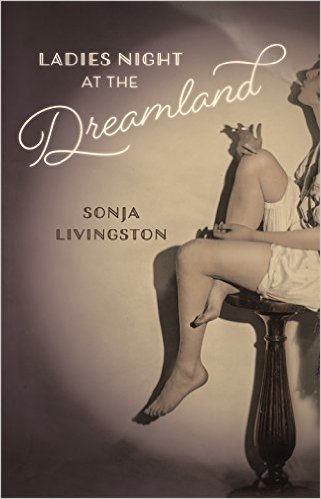 “…she listens to reports of war in Europe…people lean in to discuss FDR, the Lindbergh baby, Amelia Earhart’s final flight…Audrey stands in line, overhearing news of the McCarthy hearings, Eisenhower, and Nixon…she watches anchormen speak of Korea, Vietnam, and the Cold War, start to finish…Satellites, astronauts, and the moon landing. Martin Luther King and Kennedy, their eventual assassinations, until talk is replaced by Three Mile Island. Love Canal, the Exxon Valdez…She’s there for all of it: Iran-Contra and Monica Lewinsky. The invention of the automatic coffeemaker, the atomic bomb, personal computers. The years fall like spent leaves…Audrey remains at the Saint Lawrence State Hospital from 1931 to 1996.”  — Ladies Night at the Dreamland, by Sonja Livingston

I recently wrote about Sonja Livingston’s first essay collection, Queen of the Fall, which was the 2016 choice for If All of Rochester Reads the Same Book, and her memoir, Ghostbread.

Now she has a new collection just published, a strange and haunting meditation on the lives of women and girls from the past. Some of these women were accomplished and briefly famous, some were trail-blazers and rule-breakers, others were unremarkable on the surface but heroic in their strength and endurance, and some were outright victims.

Sonja is from Rochester, and several of the women she writes about have connections with upstate New York where I live.

It’s difficult to describe these essays, they’re so clever, beautiful, and unusual. Ladies Night at the Dreamland is a great read if you want something very different. Using detailed, thorough research and brilliant conjecture, Sonja sheds light on women who were largely ignored and gives them a dignity they never had in life. Often, Sonja inserts herself in the stories she tells in moving and provocative ways.

The collection of essays is framed by two imaginary scenes in 1920 that take place at the Charlotte Beach carousel on Lake Ontario in Rochester, New York, and at the dance hall that once stood there, known as the Dreamland.  (It burned to the ground in 1923.) My husband and I visit the carousel on hot summer nights when we want to walk by the lake and cool off. Charlotte Beach was once known as the Coney Island of the West.

In the last of the two scenes, Susan B. Anthony, who is buried in Rochester’s Mount Hope Cemetery, which is across the street from the medical center where I used to work, makes an appearance and speaks with Sonja. The author dresses Susan in the flapper get-up of the day, and tells her that the Nineteenth Amendment has passed. Thanks to Susan’s hard work, finally women have the right to vote.

One after the other, the women Sonja has written about gather around Susan B. Anthony to speak with her and thank her.

Sonja Livingston wrote these essays with love. Here are a few of them:

“Some Names and What They Mean” Carmen, Wanda, and Michelle were young girls strangled, raped, and killed in the early 1970s in Rochester by a serial killer known as the Alphabet Murderer.

Carmen managed to escape from the killer, and was seen by drivers running along 490 West, but no one stopped to help, and her abductor caught up with her. Sonja imagines herself back in 1971, driving on 490; she sees Carmen and rescues her. They drive on and encounter Wanda and Michelle, and rescue them, too. Together in the car, Sonja asks them who they’d like to become and helps them choose new names.

“Mad Love: The Ballad of Fred and Allie” In 1892, a society girl from Memphis, Alice Mitchell, murdered her female lover, Freda Ward. Sonja tells their story, imagining what Alice thought and felt.

“Human Curiosity: A Circular Concordance” Krao Farini, known as “The Human Monkey,” was a carnival attraction loved by no one who eventually became the bearded lady at Coney Island.

“The Goddess of Ogdensburg: A Rise and Fall in Seventeen Poses” – Audrey Munson was an artist’s model for the greatest sculptors in the early 1900s. Her naked body is on the Pulitzer Fountain in Central Park and the Manhattan Bridge; in Penn Station; and atop the Municipal Building in Manhattan and other municipal buildings across the country. She died in a state mental institution in Point Airy, New York.

“The Opposite of Fear” Maria Spelterini crossed Niagara Falls on a tightrope in 1876.

“Freeze-Frame” Valaida Snow was an African American jazz trumpet player of enormous talent known as “Queen of the Horn” from east Tennessee. She played in Harlem, then Paris, then Germany, where she was imprisoned by the Nazis during World War II.

It’s especially gratifying to read these essays about women as Hillary Clinton runs for president. I imagine Sonja telling Susan B. Anthony all about it.

Do you read creative nonfiction? Any recommendations? Are there books that you love that are extra meaningful because they take place in the region where you live?