“Members of the German Student Union carried out the book burning with enthusiasm. At Opera Square, the students formed a human chain, passed the books from hand to hand, and then cast them into a pile. Estimates of the number of books in the bonfire pile range from twenty-five thousand to ninety thousand. As each book was thrown in, a student announced the reason this particular book was being ‘sentenced to death.’ The reasons were stated like criminal charges. …The Feuersprüche [Fire Incantations] had a party atmosphere with dancing, singing, and live music. At midnight, [May 10, 1933] Goebbels appeared and gave a raving discourse known as the Fire Speech. That same night, similar events were held in Munich, Dresden, Frankfurt, and Breslau….” The Library Book, by Susan Orlean

Calling all book and library lovers and their friends! (Especially print book lovers.) If you’re looking for a last-minute Christmas gift for the reader on your list, stop by your local bookstore and pick up a copy of The Library Book.

While she was writing The Library Book, author Susan Orlean lit a match and burned one of her tattered old paperbacks – just to see what it felt like to burn a sacred object and how easily a book could be set alight. It didn’t feel good, she said, but it was easy to burn once the book reached 451 degrees, the temperature at which paper burns: Fahrenheit 451 vanished in a small conflagration.

One of the most riveting parts of The Library Book is Orlean’s description of the 1933 Nazi-instigated book burnings in 34 university towns and cities, conducted in part by a minority of college students who called themselves the German Student Union. I’d always imagined small bonfires sacrificing a few hundred books. Maybe because I find book burning incomprehensible, I never conceived of the vast numbers burned – up to 90,000 in one fire! –  or the live music, enthusiastic crowds, and tragic number of libraries destroyed in World War II and other wars, both deliberately and collaterally.

“Books are a sort of cultural DNA, the code for who, as a society, we are, and what we know. All the wonders and failures, all the champions and villains, all the legends and ideas and revelations of a culture last forever in its books. Destroying those books is a way of saying that the culture itself no longer exists; its history has disappeared; the continuity between its past and its future is ruptured. Taking books away from a culture is to take away its shared memory. It’s like taking away the ability to remember your dreams. Destroying a culture’s books is sentencing it to something worse than death: it is sentencing it to seem as if it never lived.”

Susan Orlean is one of the most brilliant contemporary American writers of nonfiction. She writes for The New Yorker and has authored many books; I’ve read only one other: the quirky The Orchid Thief: A True Story of Beauty and Obsession, which was made into the movie Adaptation (starring Meryl Street, Nicolas Cage, and Chris Cooper.) The book is strange and marvelous, and the movie is even stranger – perhaps not to everyone’s taste. If you love books, though, you’ll find The Library Book more accessible yet equally as passionate. Orlean is a book-lover from way back and writes movingly about her childhood library visits with her mother, who always said that if she’d had a career, she would have been a librarian.

Susan’s private book burning and those of the Germans echo and deepen The Library Book’s central plot, which involves the tragic burning of the Los Angeles Public Library in 1986. It burned for seven hours; over 400,000 books were destroyed and 700,000 more damaged. No one is sure whether the fire was arson or an accident. The prime suspect, Harry Peak, a compulsive but likable liar and something of a tragic figure, changed his story every time he was questioned by the police. Woven into the story of the burning and resurrection of the LA Public Library is Orlean’s love letter to books, reading, libraries, and librarians.

Susan writes of her own motivation to write, one of the most eloquent and true statements I’ve ever read about why someone would devote oneself to this painstaking labor:

“I fear not just that I, personally, will be forgotten, but that we are all doomed to being forgotten – that the sum of life is ultimately nothing; that we experience joy and disappointment and aches and delights and loss, make our little mark on the world, and then we vanish, and the mark is erased, and it is as if we never existed…..But if something you learn or observe or imagine can be set down and saved, and if you can see your life reflected in previous lives, and can imagine it reflected in subsequent ones, you can begin to discover order and harmony. You know that you are part of a larger story that has shape and purpose – a tangible, familiar past and a constantly refreshed future. We are all whispering in a tin can on a string, but we are heard, so we whisper the message into the next tin can and the next string. Writing a book, just like building a library, is an act of sheer defiance. It is a declaration that you believe in the persistence of memory.”

Isn’t this why we haunt libraries and bookstores, to find those singular voices, many from the past, that for whatever reason speak to us so personally and vividly?

“You don’t need to take a book off a shelf to know there is a voice inside that is waiting to speak to you, and behind that was someone who truly believed that if he or she spoke, someone would listen. It was that affirmation that always amazed me. Even the oddest, most peculiar book was written with that kind of courage — the writer’s belief that someone would find his or her book important to read. I was struck by how precious and foolish and brave that belief is, and how necessary, and how full of hope it is to collect these books and manuscripts and preserve them. It declares that stories matter, and so does every effort to create something that connects us to one another, and to our past, and to what is still to come.”

“In Senegal, the polite expression for saying someone died is to say his or her library has burned. When I first heard the phrase, I didn’t understand it, but over time I came to realize it was perfect. Our minds and souls contain volumes inscribed by our experiences and emotions; each individual’s consciousness is a collection of memories we’ve cataloged and stored inside us, a private library of a life lived. It is something that no one else can entirely share, one that burns down and disappears when we die. But if you can take something from that internal collection and share it – with one person or with the larger world – on the page or in a story recited – it takes on a life of its own.”

These excerpts don’t even begin to address Orlean’s fine chapters about libraries,  librarians, their history, and their future. Having been a book editor and a (medical/academic) librarian, I’ve heard more than once from people who are quite sure  books will disappear and that we no longer need libraries. To them, I’d say: fake news, conspiracy theories and the disruption of democracy. I’d point them to these and many, many other links:

Dr. Google is a liar

The Revenge of Analog: Real Things and Why They Matter

I leave you with this arresting image from The Library Book, which takes place around the clock in my hometown of Cleveland:

“The lobby of the OverDrive headquarters [in Cleveland] is huge and high. A ten-foot-square screen that displays a world map dominates the center of the lobby. Every few seconds, a bubble pops up from somewhere on the map, showing the name of the library and the title of the book that had just been borrowed. The screen is mesmerizing. If you stand there for a few minutes, you will see that someone at a small library in Arles, France, has just checked out L’Instant présent by Guillaume Musso; that someone in Boulder, Colorado, has borrowed Harry Potter and the Cursed Child by J.K. Rowling; and that in Mexico City, someone has claimed a copy of El cuerpo en que nací by Guadalupe Nettel. It feels like you’re watching a real-time thought map of the world.”

By the way, the American Library Association maintains yearly lists of books that have been challenged, restricted, removed, or banned.

Up next: My best read of 2018 – a fat volume of fiction several inches thick, with a cover that is a work of art. Wondrous and important. 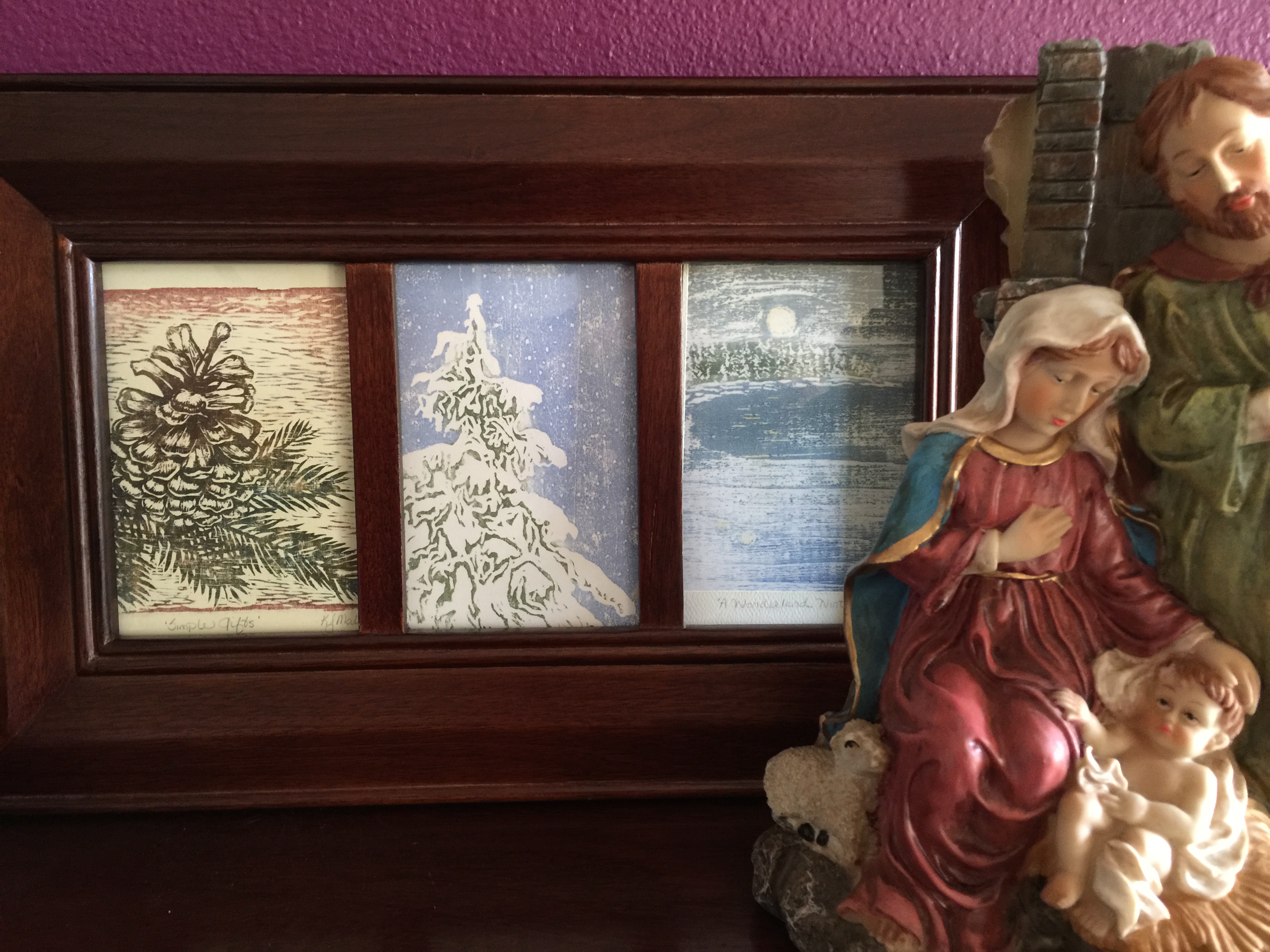 Merry Christmas and Happy New Year! I hope you find some good books under the tree. Woodblock prints by @blueberry_hills.