Off the Beaten Path

“The letter’s authors informed us of the nation’s persisting need for democratic reform. Each of us was told of widespread irritation with our work, and the government’s desire to speak with us.”      Resistance, by Barry Lopez

This is a remarkable collection of short stories by Barry Lopez published in 2004, in the wake of 9/11 and the Patriot Act. If you’ve been following Books Can Save a Life, you know I’m a huge fan of Lopez. I read Resistance a couple of years ago and thought about it this week as the inauguration approached.

It’s hard to capture the essence of these nine singular and unusual stories–I don’t think there is a collection quite like it. If you want to read something off the beaten path, these stories are perfect. The characters are not your ordinary, everyday people.

If you are looking for courage, strength, and inspiration in difficult times, give this book a try. 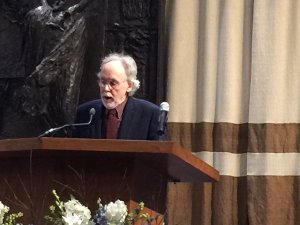 Barry Lopez speaking in Rochester in 2016.

The stories are fictional testimonials by a translator, an indigenous rights expert, a doctor, a cabinetmaker, an architect, a historian, and others. They live and work in China, Brazil, France, Germany and across the globe.

Each has undergone a spiritual or political awakening and chosen to resist the mainstream. For them, the personal has become political. Their causes include environmental degradation, materialism, indigenous rights, war, and mindless conformity.

Because of their resistance, they have become “parties of interest” to the government. All have gone into hiding.

This isn’t entertaining, light, or necessarily comforting reading, and the collection won’t appeal to everyone. I’ve enjoyed reconnecting with Resistance in the days before the inauguration.

“We regard ourselves as servants of memory. We will not be the servants of your progress. We seek a politics that goes beyond nation and race. We advocate for air and water without contamination, even if the contamination be called harmless or is to be placed there for our own good. We believe in the imagination and in the variety of its architectures, not in one plan for all, even if it is God’s plan. We believe in the divinity of life, in all its human variety. We believe that everything can be remembered in time, that anyone may be redeemed, that no hierarchy is worth figuring out, that no flower or animal or body of water or star is common, that poetry is the key to a lock worth springing, that what is called for is not subjugation, but genuflection.”

“Our strategy is this: we believe if we can say what many already know in such a way as to incite courage, if the image or the word or the act breaches the indifference by which people survive, day to day, enough will protest that by their physical voices alone they will stir the hurricane.”

“We are not to be found now. We have unraveled ourselves from our residences, our situations. But like a bulb in a basement, suddenly somewhere we will turn on again in darkness….We will disrupt through witness, remembrance, and the courtship of the imagination.”

Photo by Peter Hallinan, Melanesian art expert.  I didn’t know Peter well enough to know his political beliefs, but his unconventional life reminds me of the characters in Resistance.

“She is fascinated but not dismayed to discover that she has forgotten so much.

Is she really the same woman who celebrated Easter 1889 in Athens and walked up to the Acropolis with her husband?

Who spent a ‘most interesting day viewing the cisterns of Carthage’ with Victor and Armand in 1896?

Who once wrote on her anniversary in 1900, in an apartment on 97 rue de la Pompe in Paris, ‘In afternoon we went to Exp. and up the Trocadéro tower, then to Élysée Palace Hotel, saw King Leopold come in. In evening at dinner we ordered St. Honoré and champagne. M. Guerrier got up and improvised a poem and there was much gaiety and good humor. Armand gave me a gold watch charm’?”  De Potter’s Grand Tour,  Joanna Scott

This much, we know: In 1905, Joanna Scott’s great grandfather disappeared while on board a ship off the coast of Greece. A collector of ancient Egyptian art (some of it is at the Brooklyn Museum) and a world tour guide, he was at his wit’s end, hounded by creditors and litigators.

The question is: Did he commit suicide? Was he pushed overboard? Or, did he fake his own death and assume a new identity, leaving behind his beloved wife, Aimée, and his son?

How would you like to inherit that family mystery?

Joanna Scott did, in the form of Armand’s letters, postcards, photos, and documents, and the multi-volume journal of his wife, Aimée. This treasure trove had been sitting in a steamer trunk in Scott’s mother’s storage unit for years, until one day they unearthed it while searching for a diploma.

Intrigued, Scott threw herself into research and began writing a nonfiction account of Armand de Potter’s life. Ultimately, that proved too confining: Scott discovered that the mysterious and elusive Armand wasn’t who he said he was, and no one knew, not even his wife. So Scott switched to fiction, which gave her more freedom to suppose and imagine.

I read this novel ages ago and never got around to posting about it, but the book has stayed with me all this time. It’s not for everyone–Joanna Scott is a celebrated writer, but this particular novel didn’t garner the best of reviews.

A photo of Armand de Potter, the author’s great grandfather, walking away from the camera. He was, indeed, a mysterious figure.

I, on the other hand, loved it. I loved the larger-than-life way Armand and Aimée lived traveling all over the world leading their educational tours. Armand was an autodidact who pretended to be descended from Belgian royalty and more educated than he was. Nonetheless, as Scott portrays him, he was a scholar and a lover of the world with a passion for sharing that love with the people who signed up for his tours.

“To travel is to live,” Armand de Potter wrote in one of the documents Scott found in the steamer trunk.

Some time in the late 1800s, Armand also wrote this prescient and hopeful passage: “The incalculable benefits of foreign travel can only be half told by our children….They will be appreciated by their sons and daughters, at a time when travel will have made the world very small and the human race what it is destined to be–one great fraternity.”

If you’re an armchair traveler, if you love history, and if you want an unusual story, I think you might like De Potter’s Grand Tour.

I enjoy Joanna Scott’s novels a great deal. One of my all-time favorites is Liberation, which takes place in Sicily, one of my favorite places in the world, during World War II. Scott is a much loved Professor of English here at the University of Rochester.

Speaking of family history, I’m off to a family reunion next week, where we’ll be reading a book loosely connected with a couple of the more colorful family members. I’ll tell you about it when I return.

I’ll leave you with what Armand de Potter had to say about good books (I would also add “women” of course):

“In the most beautiful books, great men speak with us, they give their most precious thoughts, and pour their soul into ours. Let us thank God for the creation of books. They are the voices of those that are far and of those that are dead; they make us heirs of the intellectual life of the past ages. Books furnish to all those who will use them with sincerity the society, the spiritual presences of the best and the greatest men.”