In my last post, I said the women fared better than the men in Charlotte Rogan’s book The Lifeboat.

Once the survivors are back on land, though, it’s still a man’s world.

Narrator Grace Winter is on trial for murder. In 1914, all the lawyers for the prosecution and the defense are men. The judge is a man. All the laws were written by men. The psychiatrist appointed to appraise Grace’s sanity and her true motives is, of course, a man.

Reading The Lifeboat and trying to imagine what the characters and the times were like, I recalled scenes from Titanic, the movie. I thought about Rose (Kate Winslet) being pressured by her mother to marry the wealthy son of a steel magnate to save her family from financial ruin.

Then there is Downton Abbey’s Mary Crawley of the same time period, disinherited from the family fortune by a distant male cousin.

In fact, Grace is on the lifeboat in the first place because she was on her honeymoon voyage, having pulled off marrying the already-engaged banker Henry Winter to save herself from having to be a governess.

A seismic male-female battle occurs in The Lifeboat, but it is never really acknowledged or spoken of aloud. Some of the most revealing dialogue occurs in whispers among the desperate survivors.

We can see where the conversation about gender issues is at a century later by reading the provocative piece published in The Atlantic this past week. Written by Anne-Marie Slaughter, it’s called “Why Women Still Can’t Have It All” (not my first choice for a title.)

Slaughter quotes Facebook COO Sheryl Sandberg: “Women are not making it to the top. A hundred and ninety heads of state; nine are women. Of all the people in the world, 13 percent are women. In the corporate sector, [the share of] women at the top….tops out at 15, 16 percent.”

Quote: Slaughter, Anne-Marie. “Why Women Still Can’t Have It All,”  The Atlantic, July/August. 2012.

He’s a man. Most men think they are God.

If you’re a man who ends up on Lifeboat 14 adrift in the Atlantic Ocean, you’d better play your cards right.

The women tend to fare better.

On this particular lifeboat, being a traditional male authority figure of the time (1914) will take you only so far. Whereas, if you get along with people, if you’re nurturing and supportive, if you’re a rock of strength and give people what they need, even though you’re a woman you can then manipulate them just a little to get them to do what you want…..

Charlotte Rogan’s The Lifeboat is the PERFECT book for reading groups and book clubs, especially those with both men and women, because you’re going to have great discussions about gender, the battle of the sexes, how men and women use each other…..the whole ball of wax when it comes to male/female relations.

And that’s just scratching the surface of this confounding book.

The Lifeboat is about morality – the difficult, impossible choices we make to survive, and how we justify those choices after the fact.

It’s the kind of book I want my family and friends to read so they can help me sort out who is right and who is wrong, which characters have the moral high ground and which ones don’t.

On page 16, at the end of the chapter entitled “Day One,” the narrator, Grace Winter, makes a statement I found morally repugnant. I don’t like this woman, I thought. In her place, I’d make a very different decision.

If you’re reading or have read The Lifeboat, what do you think it says about men and women? Are there particular incidents from the book you can’t get out of your mind? Does it leave you feeling morally confused? Please comment below. I’d love to hear from men and women!

Quote is from The Lifeboat, Charlotte Rogan, Little, Brown and Company, New York, 2012

The saddest thing about the sacrifice was that it was being made for people such as we.

Thirty-nine men and women adrift in the Atlantic Ocean, 1914.

What I hadn’t expected about The Lifeboat is how my feelings toward newlywed Grace Winter (the narrator) would constantly change.

How one minute I like her, and the next minute, I don’t.

How sometimes Grace is full of insight, and other times she’s fooling herself.

How, just like the jury and her lawyers, I’m constantly trying to figure out if she’s telling the truth.

I hadn’t expected a grand battle of the sexes. As if they don’t have enough to contend with.

I’m wondering how this will end.

If you’re reading The Lifeboat, too, what do you think? Please share your comments.

In May, I happily stumbled on the secret to enlightenment when I attended the Medical Library Association (MLA) annual meeting in Seattle and vacationed with my family in the Cascades.

It all started with MLA speaker and best-selling author Steven Johnson, who told us about a theory he encountered while researching his latest book, Where Good Ideas Come From: The Natural History of Innovation.  (Steven is a great speaker, not to mention that he reminds me of one of my favorite Downton Abbey characters.)

Coffeehouses, where “ideas [could] spill from one mind to another,” became popular, according to Johnson. “The coffeehouse was a multidisciplinary space.” (So are libraries, he said, in a nod to his audience.) People from all walks of life who normally would not encounter one another engaged in “a diversity of conversations.”

So, coffee and tea led people to a kind of hyperactive exchange of ideas, which in turn led to innovation.

Johnson predicts that the internet and social media are a new kind of global, virtual coffeehouse spawning another great age of innovation.

I experienced coffee and coffeehouses on an entirely new level during my stay in Washington. In Rochester, New York, we don’t have drive-through espresso kiosks as in the Pacific Northwest. They are ubiquitous in the Seattle area, even on the edge of wilderness. Up in the Cascades, if you need a dentist, quick, or someone who knows how to repair a transmission, you may be out of luck – but you can almost always find a cup of coffee.

My theory is, there is so little sunshine people need the caffeine to keep going.

For me, the combination of exceptional coffee, great bookstores, access to the internet and, last but certainly not least, absolutely stunning scenery and fresh, mountain air, was so invigorating. I felt the ideas flowing. Like I was on the verge of my own personal enlightenment.

We spent several hours visiting The Elliott Bay Book Company, Seattle’s largest independent bookstore, which also has (of course) great coffee. Elliott Bay has a full roster of book signings and author readings, and a terrific blog. Here is what I bought there:

The Housekeeper and the Professor, by Yoko Ogawa

The Spiral Staircase: My Climb Out of Darkness, by Karen Armstrong

Zen in the Art of Archery, by Eugen Herrigel

I wanted to see the high desert on the eastern side of the Cascades, so we drove to Ellensburg, WA, where we discovered the delightful Pearl Street Books & Gifts. Owner Michele Bradshaw is passionate about books and literature.  She and I talked about our reading interests. Michele enjoys making recommendations, and it’s obvious she puts a lot of thought into creative, customer-responsive bookselling.

I liked the Magic Table, a display of enticing best-sellers and high quality fiction and nonfiction. Quality is apparent on every shelf and surface in the shop, where carefully chosen books are displayed cover side up. Michele has put together a number excellent book collections, including young adult, children’s, fiction, memoir/biography, and Pacific Northwest authors.

While I was there, I bought:

The Big Burn: Teddy Roosevelt and the Fire that Saved America, by Timothy Egan

Booklust to Go, by Nancy Pearl

Climb, climb, climb Queen Anne Avenue in Seattle and you’ll be rewarded at the top of the hill with tree-lined streets and all manner of shops, including Queen Anne Books. On the shelves are literally hundreds of hand-written staff recommendations, the sign of a great bookstore. Here, Windee recommends Anne Lamott’s latest book about her new grandson, Some Assembly Required. 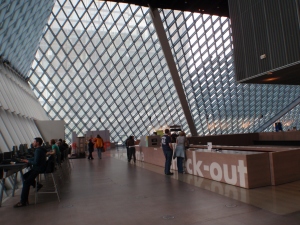 I had a great time this spring walking the Pacific Crest Trail with Cheryl Strayed (who has just inspired Oprah Winfrey to revive her book club!), sailing the waters off British Columbia with M. Wylie Blanchet and her children, clearing forest trails with Ana Maria Spagna, and observing life through the eyes of the characters in Denis Johnson’s Train Dreams.

In June: The Lifeboat by Charlotte Rogan

“Today I shocked the lawyers, and it surprised me, the effect I could have on them.”

This is the opening line of The Lifeboat by Charlotte Rogan (first-time, best-selling novelist making her debut at age 57, wrote novels in secret for 25 years when the kids were at school), which I’ll be reading in June.

Highlights from the jacket copy: 1914. A bride on her honeymoon. Adrift on the Atlantic Ocean. Not enough to go around. A power struggle. Choosing sides.

Will you read it with me?