This is the Kattegatt, a sea off the coast of western Sweden, sometimes considered a bay of the North Sea and the Baltic Sea. Many kinds of seabirds nest here. Photo by A. Hallinan.

I’d just have to trespass. It seemed no one was home, and I’d come so far.

Some 4,949 miles, according to Google Maps, from central Oregon to Långås, Sweden – hoping to find at least one of the three farmhouses Mormor (Swedish for maternal grandmother) had lived in before coming to Cleveland, Ohio when she was sixteen in 1914.

My son, Andrew, and I were standing in front of one of her former homes, a classic red Swedish farmhouse that matched the photo I’d kept buried with other family papers in a box for years. We were here thanks to my incredibly kind and knowledgable Swedish fifth cousin, Jan, whom we’d connected with after my nephew and I had DNA tests.

After Jan wrote to us, I sent him family photos and some facts about my maternal Swedish grandparents. A few days after I arrived in Sweden, Jan sent me the GPS coordinates for one of Mormor’s childhood homes. And here we were – in stunningly beautiful Halland county, flat and lush green, on Sweden’s west coast.

A few housing developments dotted the landscape, but mostly this was still wide open agricultural land with old, old farmhouses like my grandmother’s, and squat, black windmills built long before my grandmother’s time, with modern wind turbines close by as well.

It was late afternoon, mid May, but the sun was still high, this being Sweden with its long days. I stepped into the yard while Andrew stayed behind the property line taking pictures.

I walked around the grounds, marveling at the obvious care with which the old exterior architectural details had been preserved.

I took my time, communing with this ancestral home and the spirits of those who’d lived there once upon a time, marveling that Mormor had left 105 years ago, never to return. Did her hands touch this old doorknob? Maybe she had the key for this old lock. Where would the garden have been that she must have helped tend? 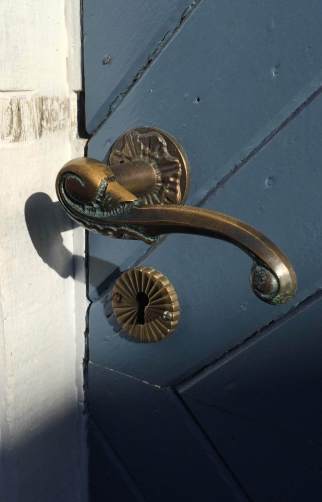 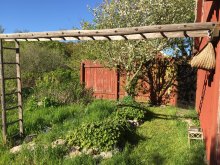 What would Mormor think of her granddaughter and great grandson making a pilgrimage to this place? I wanted to leave the owners a note – we still had time to return the next morning before the next leg of our trip – but for once in my life I had no pen or pencil.

Jan had also given me the name and approximate location of another house where he said my grandmother had been born.  I had no photo for this house, or any other information besides what Jan had given me. Andrew and I decided to drive there, next. I didn’t think we could top what we’d just seen – but I was wrong. 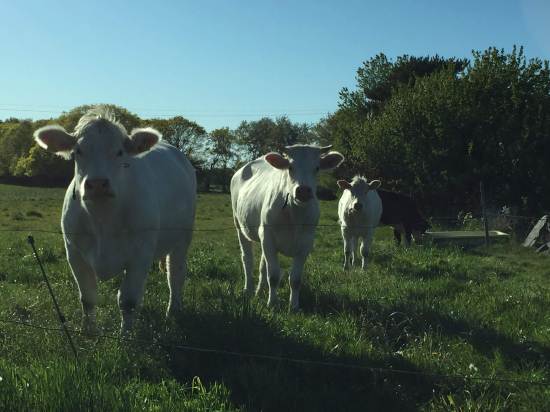 They did not seem pleased to see us when we arrived at our second location, where one of the old houses bore the name of the farm where Jan said my grandmother had been born.

At this second location, a cluster of farmhouses, Andrew and I stood debating. Which of the houses would have been my grandmother’s birthplace? I thought it must be the house with the old sign – Lönestig gård – the name Jan had given me – but Andrew thought it might be one of the houses across the road. As we approached those homes, I debated whether I should knock on one of the doors.

Just then, a woman came across the meadow, walking five magnificent dogs – two fluffy, snow-white Pyrenees and three sheep dogs. She studied us – we were obviously strangers in these parts. I introduced myself and Andrew.

“We’re from the United States,” I said. On a hunch, I decided to show her another old photo I’d had for years, of yet a third farmhouse my grandmother had lived in, directly on the sea. I’d always loved the photo’s romantic aura, with seabirds, rocks and water.

“We’re looking for this farm,” I said, taking out my smartphone and pulling up the photo. “It was where my grandmother – my mormor – lived.”

Louise gazed at the photo for a moment. “I know this house,” she said. “I’ll take you there.”

This is where Louise took us:

We stayed for a couple of hours, talking, talking, talking with the current owners. We met Lars, who lives in one portion of the house with his wife, and Lennart, who resides in what was once the boathouse.  The farmhouse is directly on the sea – we walked way, way out on the rocks. Lars told us many species of seabirds nest in this protected area. It was still bright daylight even though it was nearly 8 pm; it felt as though the universe was making the day longer just for us, to give us more time to linger.

Lennart invited us into his portion of the house. He dug out a regional history book in Swedish, and there we found a photo of my great grandparents. Lennart gave me the book as a gift.

Lars lives in the main house. Louise, on the right, led my son and me to Mormor’s house. You can see the house on the horizon. The shadow belongs to my son. 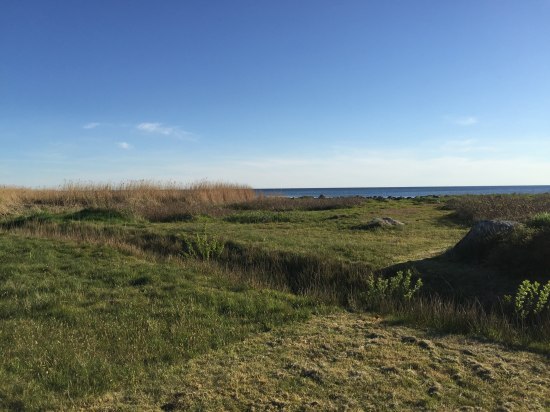 You can walk to the sea directly from Mormor’s house.

After our visit with Lennart and Lars and the old farmhouse, Louise invited us to her home nearby, where she raises prize-winning sheepdogs. When I stepped into her old classic Swedish farmhouse I was astonished; it was like walking into one of the Carl Larsson prints I’d hung in my upstate New York home for decades. 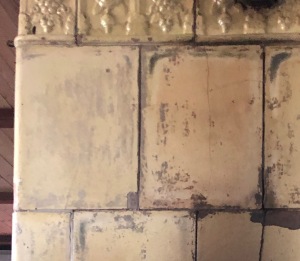 Detail from Louise’s kakelugn, an old masonry heater or stove. (A. Hallinan)

Louise has an old, Swedish floor-to-ceiling stove that heats the entire house, and a spacious Swedish kitchen and dining room with a wall of windows to let in as much light as possible on dark winter days.

And best, best of all, a few days later Louise connected me with two of my closest Swedish relatives!! I haven’t seen them yet – that’s for the next trip.

In everyone we met on our sojourn, I sensed a strong, deep love for this corner of Scandinavia and it’s beautiful natural world.

Countless thanks to Jan, Louise, Lars, Lennart, and all our new Swedish friends who helped my son and me dive deeper into our family history.

Below is a book about how knowing little about our ancestors may not be the best thing, and how learning about them can heal us. I’ll let you know when I finish reading what I think and how its insights might impact my family history research. So far, a couple of chapters in, I’m fascinated.

More family history discoveries to come on my next post, about Morfar (Grandpa).

My son and I stayed in Falkenberg a few blocks from the sea.

What I was reading, etc, etc:

I read The Royal Physician’s Visit by Per Olov Enquist as I travelled, a fictionalized account of the mentally ill Danish King Christian VII, his young wife Caroline Mathilde, and the king’s physician (Johann Struensee) who tried to enact Enlightenment reforms that were not appreciated by the people. Later in my trip, I bought The Wandering Pine, an autobiographical novel I haven’t read yet.

Below are scenes from Waldemarsudde in Stockholm, the former home of Prins Eugens, now a gorgeous museum. My friend, Darlene, and I lingered a long time in this beautiful place. The day we visited there was an exhibit about an art colony in Grez, France, where many late 19th century and early 20th century Swedish artists went to paint. The lower left photo is part of a Carl Larsson painting of his wife, Karin (who was also an artist), and their child, entitled “Lilla Suzanne” (Little Susanne). The lower right painting is by William Blair Bruce, “Plein-Air Studio.” 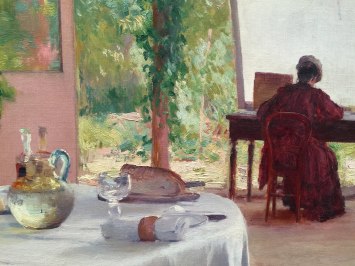 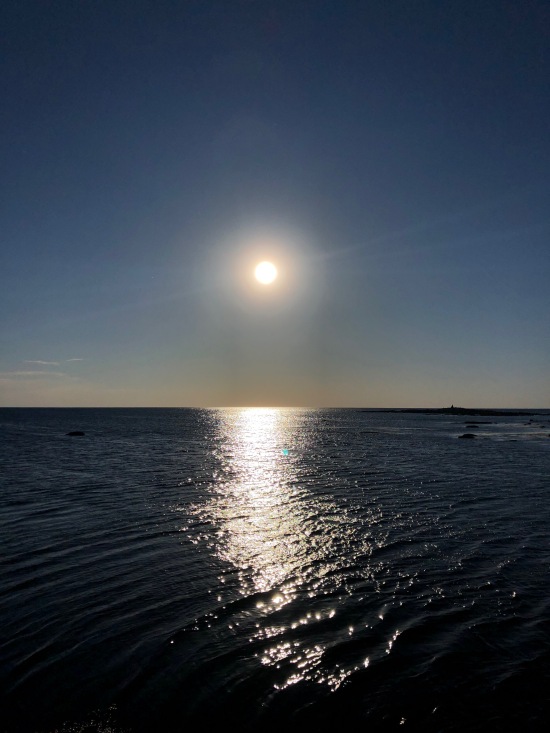 The Kattegatt. This photo, and the first sea scene in this post, are views from Mormor’s farm. (A. Hallinan)

Next on Books Can Save a Life:

What I found in Sweden, Part 2

Enchanting Sicily, and a wedding