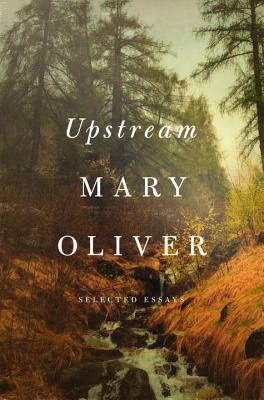 “The most regretful people on earth are those who felt the call to creative work, who felt their own creative power restive and uprising, and gave to it neither power nor time.”  Upstream, by Mary Oliver

Mary Oliver is a gift to the world.

I’ve learned many things from America’s most beloved poet, with honoring one’s creative impulse being the most important, followed by: pay attention. She has shown us, through her poetry and essays, how to do both of these across the span of a long and fruitful life.

She won the Pulitzer Prize for her poetry collection, American Primitive,  and the National Book Award for New and Selected Poems.

Her latest collection of essays, Upstream, (which contains both new and older work) is a look back at a life well lived, steeped in nature and literature. It has been on the New York Times Bestseller Nonfiction List for many weeks.

Oliver writes of the preoccupations and obsessions of the poets and thinkers that most influenced her, including Walt Whitman, William Wordsworth, Ralph Waldo Emerson, Edgar Allen Poe, and Percy Bysshe Shelley. You don’t have to like poetry to appreciate what she has to say about these fascinating writers.

I like those essays, but I love the more personal essays taken from daily life, my favorites being “Bird” and “Building the House.” I say personal, but Mary Oliver often shines a light on some miracle of nature – a wounded gull, or a female spider, or black bear – in a way that tells us much about her own life and her deepest beliefs.

If you have not yet read Mary Oliver, you could start by listening to a few of her most famous poems, such as “Wild Geese” and “The Summer Day” and “The Journey.”

Upstream is a beautiful little book for ringing out 2016, welcoming 2017, and reading on a cold winter’s night.

“I would say that there exist a thousand unbreakable links between each of us and everything else, and that our dignity and our chances are one. The farthest star and the mud at our feet are a family; and there is no decency or sense in honoring one thing, or a few things, and then closing the list. The pine tree, the leopard, the Platte River, and ourselves – we are at risk together, or we are on our way to a sustainable world together. We are each other’s destiny.”

Merry Christmas and Happy Holidays to all!