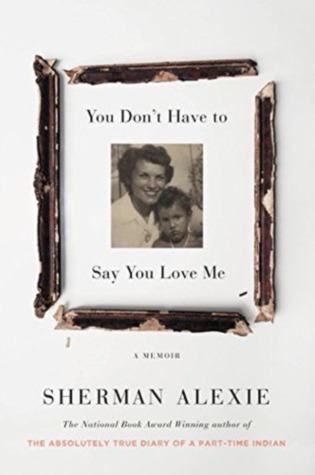 – Sherman Alexie, You Don’t Have to Say You Love Me

I was all set to write about Sherman Alexie’s newly published memoir, You Don’t Have to Say You Love Me, when I found out he has joined the ranks of those accused in the #MeToo movement.

I’d read a short while ago that children’s and young adult book publishing is the latest industry rocked by scandal, as women in publishing have come forward to tell of sexual assault and harassment by book editors, publishers, agents, and lauded authors who wield tremendous power in the literary world. Authors such as Sherman Alexie, a Spokane/Coeur d’Alene Indian who grew up in abject poverty on a reservation and who won the National Book Award for Young People’s Literature in 2007 for his best-selling novel, The Absolutely True Diary of a Part-Time Indian.

I was especially interested in this because I began my career in New York City, back in the day, in educational publishing for children and young adults. I experienced uncomfortable moments with a few men in the course of my work, but nothing like what has been recounted by women in the news recently. Now, looking back, what strikes me most is the pervasive gender inequality in the industry and how clueless I was about the serious sexual harassment and assault taking place in the workplace. (Granted, I worked in educational publishing, which was less glamorous and high stakes.) Women who experienced this were pressured into silence and isolation.

Men held nearly all of the power in book publishing – they were the ones who rose to become executive publishers and celebrated authors – while women, especially those in entry-level positions, were paid salaries difficult to get by on in New York. I don’t recall discussing this much with my female publishing friends and colleagues, except to complain about the low salaries. It was just the way things were.

So here’s a conundrum: In his memoir, Sherman Alexie writes about the rape culture on reservations. Combining prose and poetry, he writes beautifully and comically about his ambivalent relationship with his difficult, flawed, and heroic mother, Lillian, who was born of a rape and who was raped herself and subsequently gave birth to his half-sister, who later died in a house fire.

He writes of the Native American women in his personal life with ambivalence – he and his siblings were loved, protected (sometimes) and psychologically harmed by Lillian. But he writes of Native American women as a group with great empathy because of what they have endured on the reservation and in American culture. Sherman Alexie, in interviews, public appearances, and writing classes, mentors and encourages young writers, particularly Native American writers and women, to step up and take their rightful place in the world.

Yet now Sherman Alexie stands accused of inappropriate sexual overtures. He stands accused of appearing to encourage and value the writing of many a young woman, including Native American women, and of ultimately using his celebrity as a ruse to try and have sex with them. In addition to sexual harassment or abuse, he may be responsible for silencing, or at least shaking the confidence of, talented women writers. He has denied some of the allegations, while acknowledging that he has hurt people with his behavior.

On learning of this, my view of Sherman Alexie as a memoirist and as a human being has of course changed, and my thoughts about his work are complicated in ways I haven’t sorted out.

I would like to see Alexie’s career as a mentor and teacher curtailed, but I don’t think this means Alexie’s memoir should not be read.  Just as we shouldn’t remove from circulation the movies of Roman Polanski and Woody Allen, or cleanse our museums of Picasso’s paintings, or let the work of J.D. Salinger go out of print.

Maybe we need to critically view their work in a different light if we are to have any hope of making sense of this mess.

My family did not escape that mad scientist’s experiment.”

Maybe part of the solution is to work toward a culture of greater compassion. To not turn away or remain silent if a person or a group is being harmed. Because they, in turn, may harm others.

The Interior Salish, my people, had worshipped the wild salmon since our beginnings. That sacred fish had been our primary source of physical and spiritual sustenance for thousands of years.

My mother and father were members of the first generation of Interior Salish people who lived entirely without wild salmon.

My mother and father, without wild salmon, were spiritual orphans.”

Can you separate the work from the artist or writer? Or are the two intertwined and to be viewed as such? Have you read Sherman Alexie’s memoir or any of his many novels and poems?