I was so embarrassed and desperate to fit in. I didn’t tell anyone about the commune.   Rena Mundo Croshere, in the trailer for the documentary, American Commune 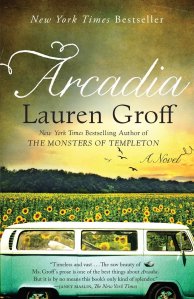 I’ve been reading Arcadia by Lauren Groff, a novel about a boy named Bit who grows up on a commune in western New York. The fictional story was inspired by The Farm, an intentional community in Tennessee that grew to become the largest commune in America in the 1970s. When I was describing Arcadia to a friend, she mentioned a documentary-in-the-making about The Farm produced by two sisters, Rena Mundo Croshere and Nadine Mundo, who were raised there.

I looked at the trailer, which is tantalizing. I’m looking forward to watching the full documentary, which is slated for release this year. I was especially taken with a moment when Rena Mundo Croshere describes abruptly leaving The Farm after over-population and a police raid caused a mass exodus of families. After a shot of flower children singing on the commune, you see a VW bus driving along a highway, then a TV ad for Barbie make-up, followed by a teenage Rena in her bedroom, with her voice-over saying she wanted to fit in so badly, she didn’t tell anyone about the commune. Moving off The Farm, with its lifestyle built on a vow of poverty, to Los Angeles and mainstream, materialistic America was, she says, like moving to another country.

This notion of hiding one’s true self and background resonates with me because I did something similar by not telling anyone about my mother’s mental illness when I was growing up. I can identify with this leading of a double life, of presenting one face to the public while hiding one’s true self and world of origin. For the same reason, I was drawn to the novel Arcadia, at once curious about what life was like inside a 1970s commune and about how the teenager, Bit, would adjust to living in urban New York after 14 years on a commune. Bit had never once seen the outside world – had never traveled to the “big cities” of Syracuse or Rochester, had never seen bathrooms as we know them with toilets and conventional indoor plumbing, had never been inside a grocery store or to public school.

Groff doesn’t glamorize the communal life but, in her view, completely abandoning the hippie cultural experiment isn’t the answer, either. I had thought Groff’s climax and conclusion would center on Bit’s adjustment to vastly different cultures, but she doesn’t end it there. She takes us into the future, to the year 2018 or so – a world of pandemics, climate change, and food shortages – implying that we need to take another look at these utopian social experiments that were, in many ways, ahead of their time.

In an interview included in the paperback edition of Arcadia, author Lauren Groff says, “In my research, I saw many 1960s counterculture idealists become, over time, obsessed with things like Peak Oil and gold and how to live off-grid, a kind of palpable belief that society is at the brink of failure. They’re not wrong. It’s hard to raise a child these days and not fear doom. This book was my argument with myself for hope.”

More about Arcadia to come in my next post.

Lynne Favreau has won my Books Can Save a Life 1st anniversary book giveaway! You can catch her very funny blog here.

6 thoughts on “Arcadia, an American commune”