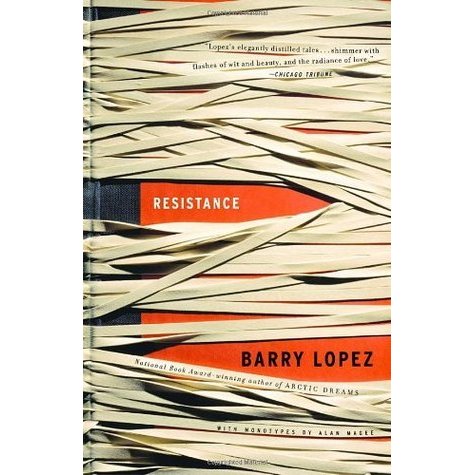 Off the Beaten Path

“The letter’s authors informed us of the nation’s persisting need for democratic reform. Each of us was told of widespread irritation with our work, and the government’s desire to speak with us.”      Resistance, by Barry Lopez

This is a remarkable collection of short stories by Barry Lopez published in 2004, in the wake of 9/11 and the Patriot Act. If you’ve been following Books Can Save a Life, you know I’m a huge fan of Lopez. I read Resistance a couple of years ago and thought about it this week as the inauguration approached.

It’s hard to capture the essence of these nine singular and unusual stories–I don’t think there is a collection quite like it. If you want to read something off the beaten path, these stories are perfect. The characters are not your ordinary, everyday people.

If you are looking for courage, strength, and inspiration in difficult times, give this book a try.

The stories are fictional testimonials by a translator, an indigenous rights expert, a doctor, a cabinetmaker, an architect, a historian, and others. They live and work in China, Brazil, France, Germany and across the globe.

Each has undergone a spiritual or political awakening and chosen to resist the mainstream. For them, the personal has become political. Their causes include environmental degradation, materialism, indigenous rights, war, and mindless conformity.

Because of their resistance, they have become “parties of interest” to the government. All have gone into hiding.

This isn’t entertaining, light, or necessarily comforting reading, and the collection won’t appeal to everyone. I’ve enjoyed reconnecting with Resistance in the days before the inauguration.

“We regard ourselves as servants of memory. We will not be the servants of your progress. We seek a politics that goes beyond nation and race. We advocate for air and water without contamination, even if the contamination be called harmless or is to be placed there for our own good. We believe in the imagination and in the variety of its architectures, not in one plan for all, even if it is God’s plan. We believe in the divinity of life, in all its human variety. We believe that everything can be remembered in time, that anyone may be redeemed, that no hierarchy is worth figuring out, that no flower or animal or body of water or star is common, that poetry is the key to a lock worth springing, that what is called for is not subjugation, but genuflection.”

“Our strategy is this: we believe if we can say what many already know in such a way as to incite courage, if the image or the word or the act breaches the indifference by which people survive, day to day, enough will protest that by their physical voices alone they will stir the hurricane.”

“We are not to be found now. We have unraveled ourselves from our residences, our situations. But like a bulb in a basement, suddenly somewhere we will turn on again in darkness….We will disrupt through witness, remembrance, and the courtship of the imagination.”