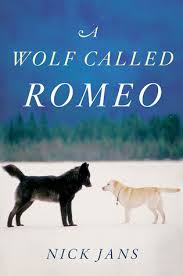 “It was one of those still days when you could hear snowdrifts collapsing in hisses, the sun so dazzling off the white-crusted ice that we seemed suspended on a cloud, bathed in light radiating from below. There we lay, three different species bound by a complex, often bitter history, taking simple comfort in the others’ presence, the sun’s warmth, and the passing of another winter.”   A Wolf Called Romeo, Nick Jans

This winter I wanted to be sure to write about a remarkable work of nonfiction that I read a few months ago, A Wolf Called Romeo by Nick Jans. A winter storm is moving in to our parts today, so it seemed a good opportunity to settle in and revisit this captivating story about a very unusual wolf who “courted” the town of Juneau, Alaska. Nick Jans has lived in Alaska for more than three decades and is a nature writer of the highest order. If you love wildlife, wolves, and dogs, you won’t want to miss this book, and you’ll likely want to read Jans’ other work as well.

No one has solved the mystery of why a black wolf wanted to make friends with Nick’s dogs and the dogs of the other townspeople who let their pets romp in the vast open spaces outside of Juneau. The black wolf was playful and unfailingly polite, chivalrous, almost courtly, which inspired Nick’s wife to call him Romeo. For half a dozen years or so, Romeo seemed to confine himself to an area of about seven square miles outside of Juneau, whereas wolves usually roam a territory of hundreds of square miles. Romeo spent long days with his domesticated companions, while keeping his distance from their human owners. He’d disappear for days at a time; at least once Romeo was spotted with a pack of wolves that passed through the area.

This got to be a complicated and controversial situation for the citizens of Juneau. Many of them grew to love Romeo and were fascinated by the rare opportunity to observe a wolf up close, while others felt wolves were to be hunted or should stay where they belonged, in the wild. Some worried Romeo might attack their pets. Rules had to be devised about how to behave around Romeo. For example, Romeo was not to be fed, so as to keep his hunting and survival skills sharp. People were advised to keep their distance from Romeo and avoid physical contact.

It’s hard to believe that at one time Nick Jans hunted and killed wolves, because he is so passionate about protecting Romeo. He recounts the history of his own relationship with wildlife, as well as the fraught relationship between humans and wolves as the American frontier was settled.

Nick observed Romeo closely for several years. He recorded his observations with the intention of writing this book which was ten years in the making. I found myself worrying along with Nick every time Romeo disappeared. For, of course, Romeo’s befriending of the town also left him vulnerable to aspects of civilization that are destructive to wildlife and nature.

This is an emotionally powerful read. Nick Jans reminds me of Barry Lopez, a nature writer I greatly admire. Here, though, Nick has made the story of the relationship between humans and the wild very personal. Romeo is fascinating and haunting, a loner caught between two worlds, not fully at home in either one of them. Thanks to Nick Jans, his story has touched those of us who may go a lifetime without seeing a wolf in the wild.

You can catch a glimpse of Romeo here.

Here is a wonderful site to find out about wolves, Wolf Song of Alaska.

A good day to read A Wolf Called Romeo