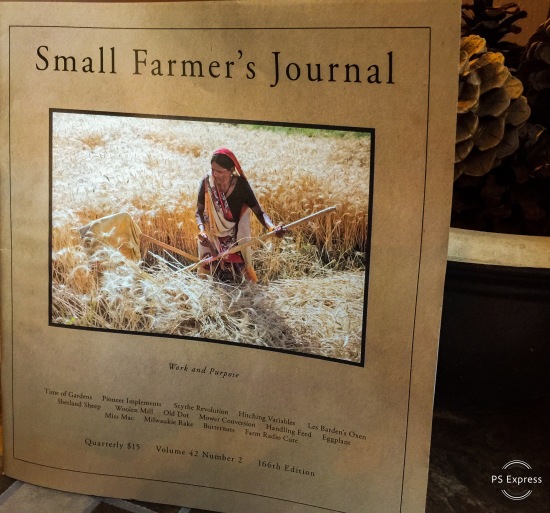 “So we journey on with these tasks, stirring the soil, watering plants, tending livestock, scribbling strings of words, putting these journals together, chasing paints and caring for each other, all in all grateful and blessed. Hoping the same and more for all of you.” Lynn R. Miller, Small Farmer’s Journal

In central Oregon, where we recently moved, the exquisite Small Farmer’s Journal has been around since 1976. Publisher, editor, writer, and artist Lynn Miller’s sentiments above are quite a contrast to this passage from my recent read: 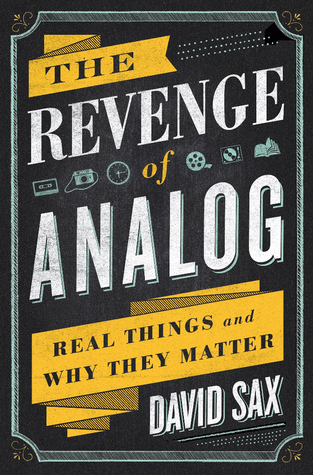 “‘The digital world… brings dysphoria – a low-level but constant heartbreak that is one of its most controversial side effects,’ wrote Virginia Heffernan in the New York Times Magazine in 2011, in an article exploring the driving force behind a growing affinity for analog….It’s still here, the persistent sense of loss. The magic of the Internet – the recession of the material world in favor of a world of ideas – is not working for everyone.” The Revenge of Analog: Real Things and Why They Matter, David Sax

I’ve had digital world dysphoria lately, and so I appreciated The Revenge of Analog and the chance to stop and savor some of the “real things” we all used to love, and many of us are loving still. David Sax says:

“Analog gives us the joy of creating and possessing real, tangible things in realms where physical objects and experiences are fading. These pleasures range from the serendipity of getting a roll of film back from the developer, to the fun in playing a new board game with old friends, to the luxurious sound of unfolding the Sunday newspaper, and to the instant reward that comes from seeing your thoughts scratched onto a sheet of paper with the push of a pen. These are priceless experiences for those who enjoy them.”

This post is simply a tribute to analog and a ramble through some of the analog bits in my life. I’d love to hear about yours, too, in the comments, please!

This I found under the Christmas tree, a bit of analog from St. Brigid Press: “Wildflowers Ending,” a hand-sewn chapbook by J.L. Davis. My copy is number 49 of 98. (“Wildflowers Ending” was handset in the Bembo family of types, and cast at the Bixler Letterfoundry. Letterpress printed with a 1909 Golding Pearl treadle press on Mohawk Superfine text paper with Lokta wraps.)

I’ll share one story from The Revenge of Analog that is especially meaningful to me, having lived in Rochester, NY for several decades and worked for a time at Eastman Kodak. David Sax’s tale of the attempted resurrection of photographic film in a small Italian village is surprisingly dramatic and harrowing. (And did you know that Kodak has just reintroduced Ektachrome?!)

Reading Sax’s story about FILM Ferrania, I was reminded of when our son got started in photography in high school using analog film. He’d spend hours in the darkroom. It made me wonder about Kodak and whether they’ve curated and archived their old film manufacturing recipes.

“What Baldini and his business partner Marco Pagni were attempting to do here, at this small, crumbling factory in this remote, bankrupt valley, was revive the production of new color still and motion picture film under the old FILM Ferrania brand.

To do that, they had to overcome every single obstacle facing an analog industry in a post-digital economy. To get FILM Ferrania to the point where it could make even a single roll of film, Pagni and Baldini needed to rescale an assembly line designed for mass-market production to a tenth of its size, with a skeleton crew, patchy knowledge, dangerous and discontinued materials, and a bare-bones budget. They had to finance and engineer the relocation of huge machines from the original film factory buildings nearby to this smaller facility, all in the few months before the demolition crew tore down those other buildings. If they missed this narrow window, the chance to rebuild FILM Ferrania would be lost forever.”

“Big Boy was an imposing five-story windowless concrete bunker the length of a city block….We climbed the staircase and passed offices that had been frozen in time….The experience of walking through a massive, perilous, abandoned factory in the dark , lit only by flashlights, is fascinating and terrifying….

The computer room, which controlled the various precision systems, from heating and cooling to the chemical mixers, sensors, and the coating machine itself, was a return to Radio Schack circa 1991. The place ran on vintage IBMs, HPs, and all manner of beige DOS relics, most with floppy disk drivers, and few with anything more recent than Windows 95.

‘The formula for automated manufacturing is stored inside these computers,’ Pagni said….

Next we sifted through drawers of blueprints, formula binders, and stacks of microfilm, which contained all the pertinent information for the emulsions, machines, and the building itself.

‘If you lose these,” Pagni said, ‘you have nothing.”

There’s lots more in The Revenge of Analog. How people are sketching and writing longhand on stationery and in journals like Moleskines and other simple, utilitarian, or ornately luxurious journals and sketch books. I learned about the newly popular way to socialize by playing board games even as my husband and I discovered a fabulous board game café in Bend.

David also talks about the rise of smaller printed magazines and neighborhood newspapers, and how the sale of vinyl record albums is a thriving part of the music industry.

I found this lovely radio/record player combination in The Vintage Moon in Bend. The radio works beautifully, after it warms up, but I need to track down a phonograph needle on the internet. 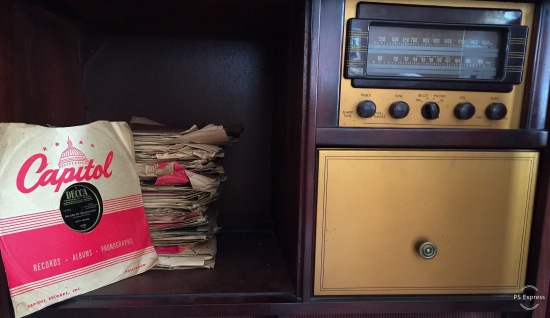 My mom’s old stack of 78’s, featuring “Me and My Imagination” sung by Betty Brewer, Decca Records. 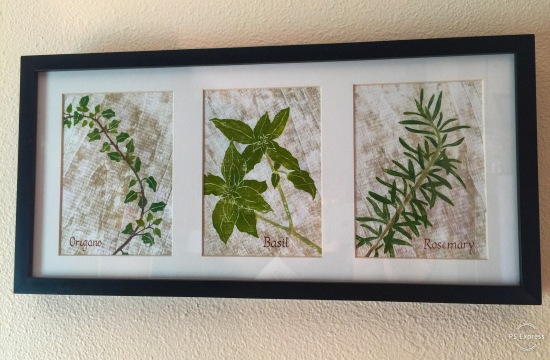 Oregano, basil, and rosemary, by artist KJ Malony of @blueberry_hills. Kathy and I were college roommates and fellow English majors; she knows I always have these herbs in my kitchen garden. It’s been great to watch her grow and mature as an artist over the years, and to have these wonderful, handmade woodblock prints.

Do have any analog loves? Or a favorite book about an analog passion? Tell us in the comments.

“We acquired a new team of Belgian horses from our friends the McIntoshs. Built a new woodshed and are working up twenty acres to plant early to a nurse crop of forage wheat as a shield for a mixture of Sanfoin, Alfalfa, and grasses. There are three seven-acre lands I also hope to have ready for spring planting. Of course, how well any of that goes will depend on winter weather. We have, over the last five years, experienced deep, long-term snow cover two years, and two years of open relatively dry and moderate weather, with one year of very cold temperatures. Time will tell what we are faced with this year. So the field work will have to proceed as these old bones and weather allow.” Lynn R. Miller, Small Farmer’s Journal, Vol. 42, Number 2 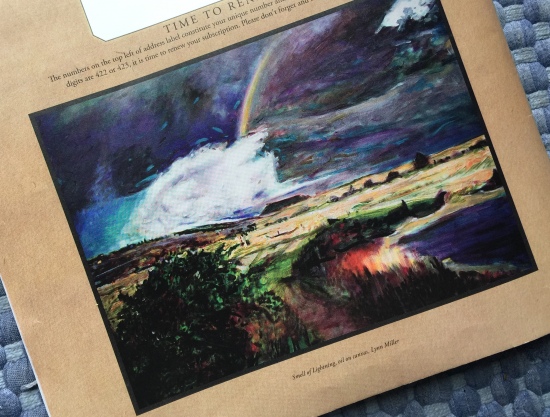 The view out my office window. Hope the meditation rock will help with the writing.

Coming up on Books Can Save a Life: A cross-country move pretty much decimated my writing practice for a while, but I finally have a work space set up and the beginnings of a regular writing schedule. I’ll be posting here once or twice a month. I’ve a handful of books I can’t wait to share with you: FOUR memoirs, including Megan Griswold’s funny and smashing The Book of Help. I’ll be attending her reading at a local bookstore tonight. Dani Shapiro’s Inheritance, which is a New York Times Bestseller, made quite an impression on me. I’ll be writing about Steve Job’s daughter’s memoir, Small Fry, too.

I also read an exquisite work of nonfiction by Rebecca Solnit. (Of course, everything she writes is exquisite.)

Plus, I’ll tell you about two new, important books about schizophrenia and serious mental illness.

One more thing – after reading Cal Newport’s newest book, I’ll be trying out digital minimalism in the coming weeks. I’ll tell you how that goes and more about his book, which is changing how people use social media and interact with the internet.