…he had doubts, like me, about who he was. 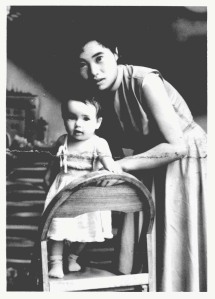 After I asked readers to share stories about books that have made a difference in their lives, I was thrilled to hear from my best friend from childhood.

Nena Adams Benhoff and I go way back.  We shared Nancy Drew books. We played piano duets and went to Brownie meetings together. We were in Mrs. Ryan’s kindergarten class of 1960 at Broadway Elementary School. Nena’s first job was in my family’s flower shop, where my father taught her floral design.

Sometimes I was a little jealous of Nena, because she was something of a celebrity in our town.

But even best friends don’t tell each other everything, and I didn’t know the whole story.

So when she sent this guest post, I was amazed. I’m still getting to know my best friend after all these years.

I was born in South Korea and adopted by an American family when I was 15 months old. In my new hometown, it was a newsworthy occasion because foreign country adoptions were unheard of in the 1950s. Articles were printed in the Cleveland Press, The Plain Dealer, and the local papers. My life story was known to just about everyone in our town.

When I started school, my teachers always spoke about how wonderful it was that I, a poor little Korean orphan, was given a chance to grow up in the United States. I was expected to bring in my Korean clothes to share with the class and talk about Korea. Now, I had no memories of Korea, I wasn’t even walking when I arrived, so I really didn’t have anything to share. Only half Korean, I thought I looked more Italian than Asian. Everyone thought I should think and act Korean, when I looked and thought, “American.”

I was confused about myself and my place in the world.

When I was about thirteen, a librarian recommended a book to read.

That book was The New Year by Pearl S. Buck, the story of a mixed race boy, half Korean and half Caucasian, who was brought to the United States by his birth father’s wife at the age of ten. While his story was not at all like mine, he had doubts, like me, about who he was. In Korea he was considered American, while in the United States he was considered Korean. Pearl Buck explained about mixed race children being like “bridge organisms,” not wholly of one world or another, but joining the best attributes of both.

After reading The New Year, I must admit I was thinking quite highly of myself, as being better than anyone!

But after a short time, I came back to reality, and started the journey of just becoming myself.

Nena Adams Benhoff has been a floral designer for over forty years. She lives in Oklahoma City.

The New Year is out of print but available from used booksellers and libraries.

Pearl S. Buck won the Nobel Prize in Literature in 1938 and the Pulitzer Prize, among other high honors and awards. She published dozens of novels, as well as short stories, biographies, and other nonfiction.

Visit Book Tips – Pearl S. Buck on the official site of the Nobel Prize to see comments by readers of Pearl Buck’s books, and to comment on your favorite books by Nobel Prize winners.

If you’d like to share a story about a book that is special to you, send an email to valoriegracehallinan[at]gmail[dot]com with the subject line: My Book Story. Please include a post of about 500 words or less in the body of the email or an idea/book you’re interested in writing about.